On Saturday we decided to go on a little picnic to a nearby park. Rather than make an actual picnic dinner we decided to just pick up some Wendy’s and head to the park. When we got to the park and took out our food we realized that our burgers had been made completely wrong. We asked for everything on the burgers- lettuce, tomato, pickles, etc. Instead they put nothing on the burgers. Just meat and cheese on a bun. Now whose fault do you think it was that the burgers were wrong? I think it was Wendy’s fault. But Rich- he thought it was my fault for not taking our food out of the bag, opening each burger up and checking to make sure they were right before we left Wendy’s. Ummm- no, I will not do that, ever. But Rich is more than welcome to do that if he wants to.

Anyhoo, after that minor incident we had a wonderful time. Hailey fed most of her food to the birds- which caused a large gathering of birds around our picnic table. Then we walked around and Hailey ran around. Hailey spotted the carousel so we took a ride on it. 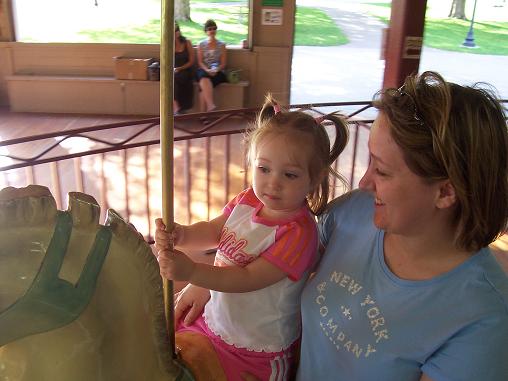 I know you can’t really tell by the look on her face, but she loved it.

After the ride was over Hailey wanted to go again.  When she found out we were only taking one ride it was not pleasant.  There was screaming and crying and yelling “MORE RIDE!”  We distracted her for a little while by watching some boats.  But when it was time to go home and she realized we were not going on the carousel again there was more screaming and crying.  And it continued for most of the way home.  And it continued for a while after we were home too with her yelling, “I WANT RIDE!  I WANT RIDE!”

Anyhoo we actually did have a really nice time.  But aren’t these toddler years fun?

Be sure to check out my latest giveaway before you leave for The Original Country Bob’s Cookbook and All Purpose Sauce.

14 comments on “A Little Weekend Fun”