For Hailey’s 6th birthday she decided she wanted to have her party at our house and have the theme be the new Disney movie Brave.  I have to be honest and say I really tried to beg her to have party anywhere but home.  I’m just not good at hosting parties or coming up with ideas, it’s just not my thing.  Well she really wanted to have her party at home and I wanted her to have the party she wanted, so I finally agreed. 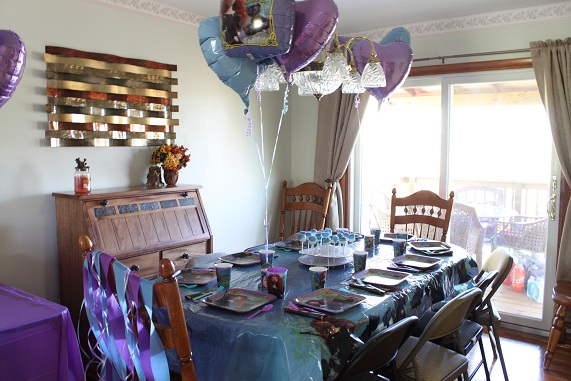 The dining room all ready for the party.  There were 10 kids coming to the party, plus Hailey. 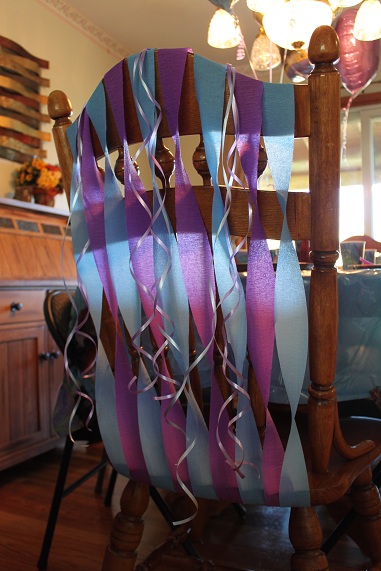 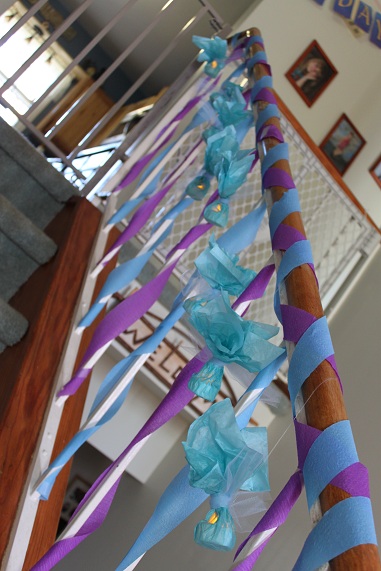 The railing all decorated- the little blue things that are hanging down are the “wisps” from the movie.

I saw this idea on Pinterest and really wanted it for a decoration.  I showed the idea to my mom and she thought she’d be able to do it.  So, my parents came over the night before the party and put this up. 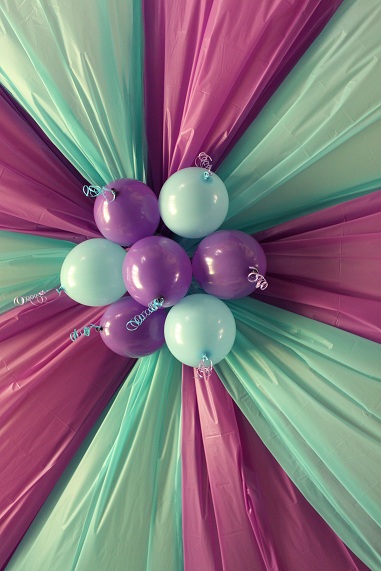 I love it!!  We got lots of comments about this decoration! 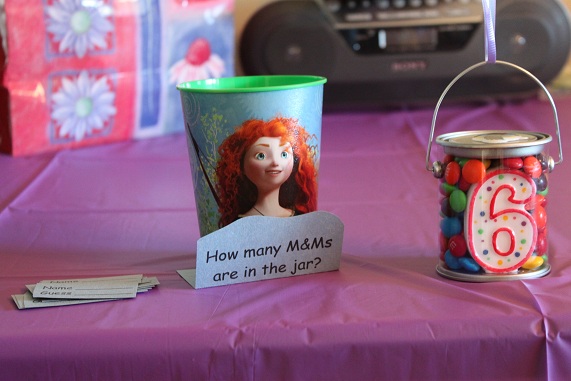 The number 6 container was also a balloon holder.  I made some extra containers with M&Ms and gave them to the closest guessers. 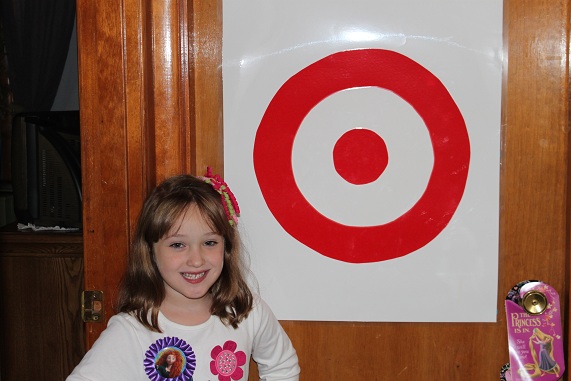 The birthday girl posing by one of the games- since Merida (the princess in Brave) loves archery, we had to have an archery tournament. 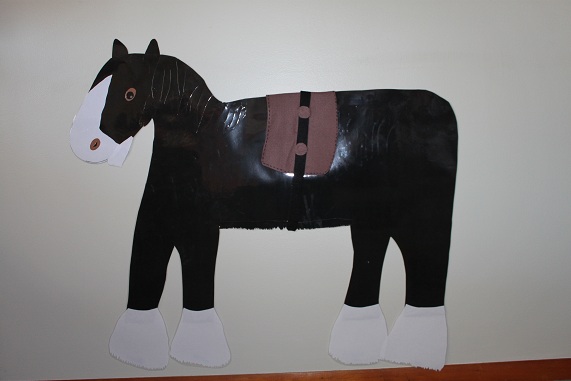 Another game- Pin the tail on Angus (Merida’s horse).  My very talented mom also made this horse for the game. 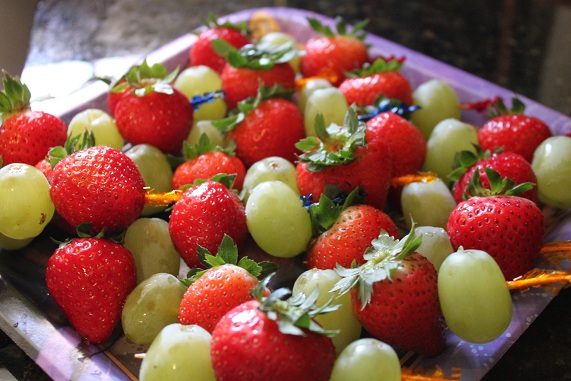 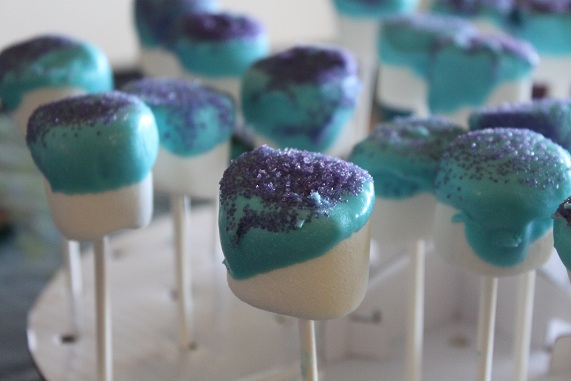 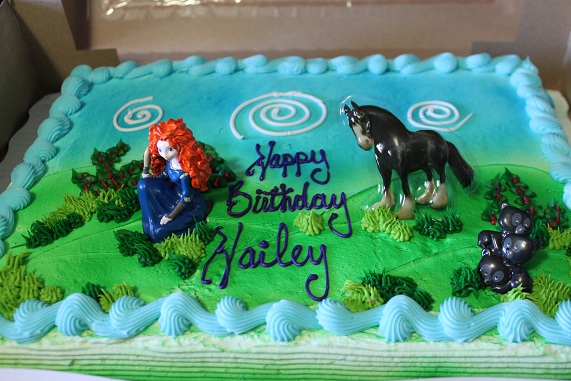 I don’t have a whole lot of pictures of the actual party to share because there are other children in the pictures and I’m just not comfortable posting them.

As the kids arrived, I greeted them at the door and then they went to the living room to listen to the story of Brave.  We have the book on CD, so my mom was doing that with the kids while everyone arrived.  When the story ended I had the kids go to the table for some lunch.   After they finished eating they went back to the living room.

We played Pin the tail on Angus.  The kids really seemed to enjoy it!

Next we played “Pass the Bear.”  Since bears are a big part of the story we passed a bear around the circle and whoever was holding the bear when the music stopped was out. When we finished that we played the archery game. 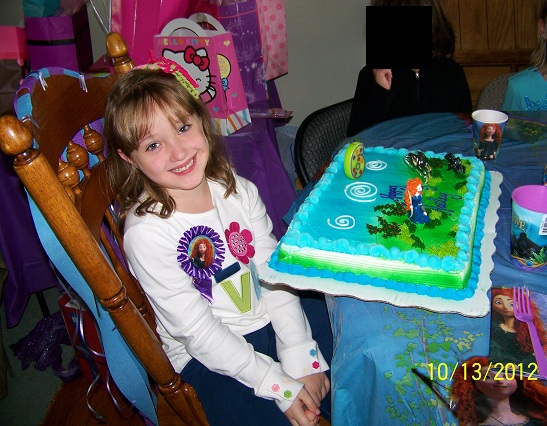 Then it was time to sing Happy Birthday and eat some yummy cake. 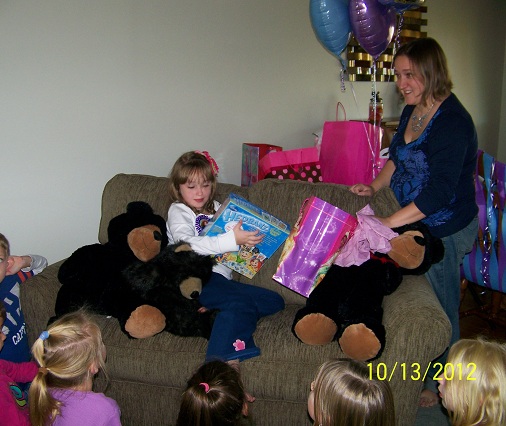 After cake, Hailey opened up her gifts.

The kids made princess bracelets after the presents were done… there were a few boys there, so they made bracelets for their moms

There was about 10 minutes left until pick up time, so the kids went outside to run off some sugar while waiting for their parents. 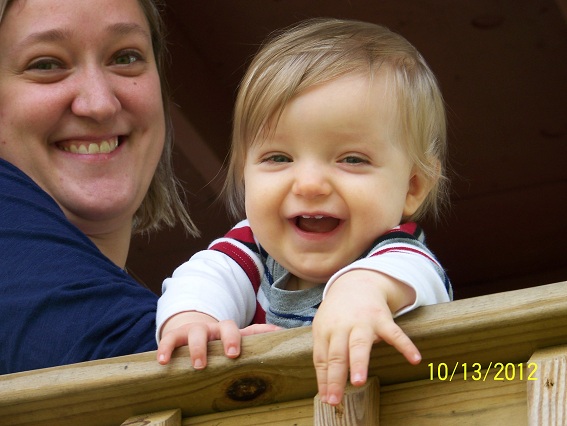 Me and Hunter watching the kids play.

The party was definitely a success and Hailey had so much fun!  The rest of the kids seemed to have a good time too.  My parents were so helpful and it wouldn’t have turned out without all their help.  That party ended at 2… then Rich and I cleaned up the house (while my parents went home to rest up after being in a house full of 6 year olds hahahaha) to get ready for the family party that was to start at 5pm.  It was nice to do it all in one day, but also a little crazy! 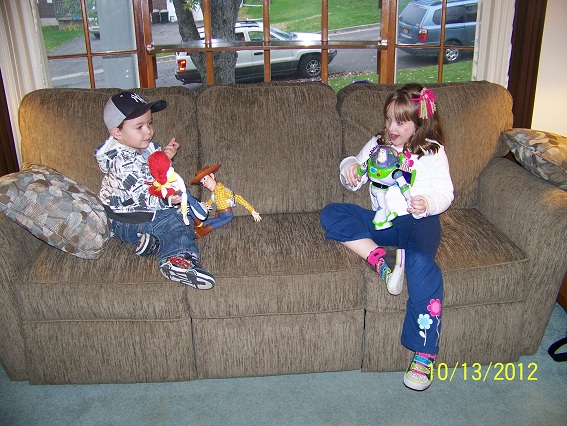 Anthony and Hailey playing with her Toy Story Toys 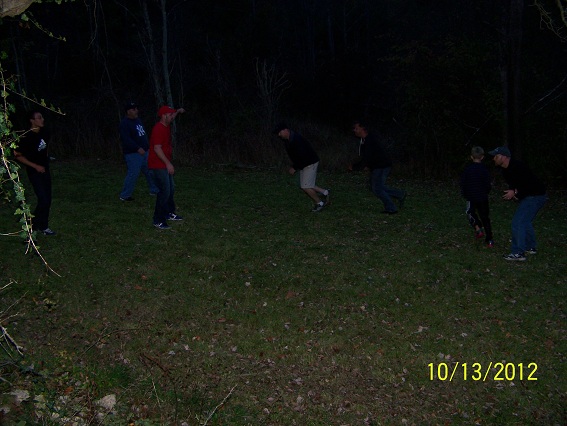 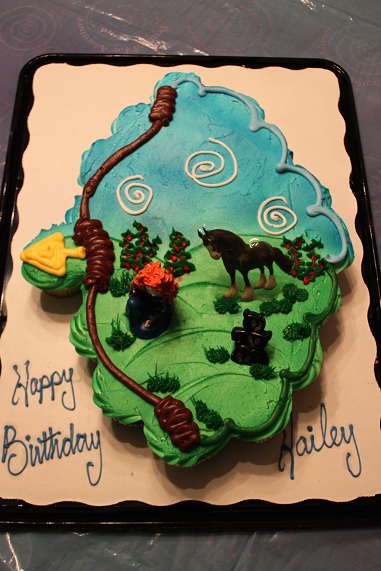 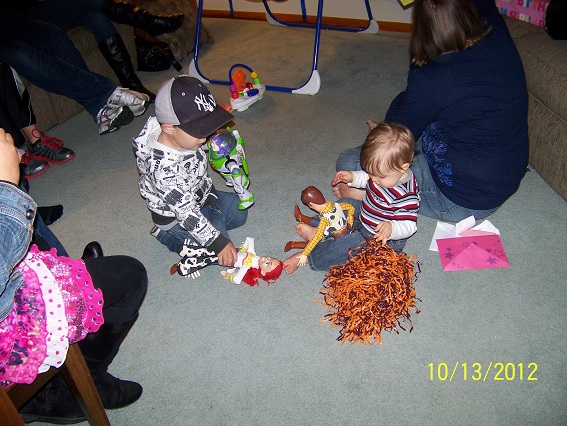 Both parties went great and it was so nice to see all the friends and family who love and care about Hailey.  Thank you to everyone who made her day extra special!