On our last day in the parks we had an early breakfast reservation at the Crystal Palace so we arrived at Magic Kingdom at 8:30am.  I love arriving in the park before it opens and walking down an empty Main St. 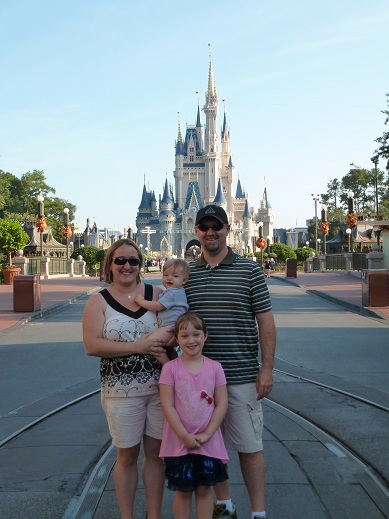 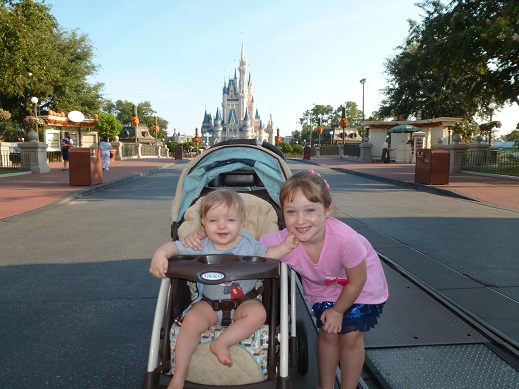 It just doesn’t get any better 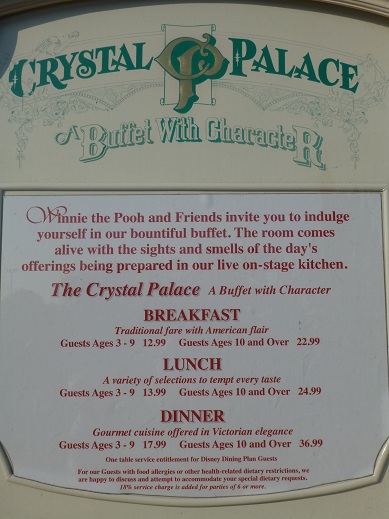 I just thought someday I might be interested in what the prices were back in 2012.  The first time we (just me and Rich) ever ate here was on our honeymoon in 2000- I would love to know how much it was then, but sadly that was before I took pictures of everything. 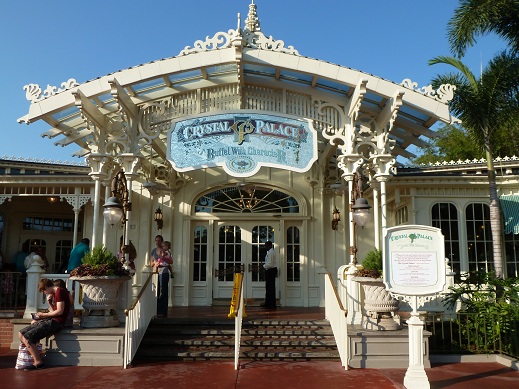 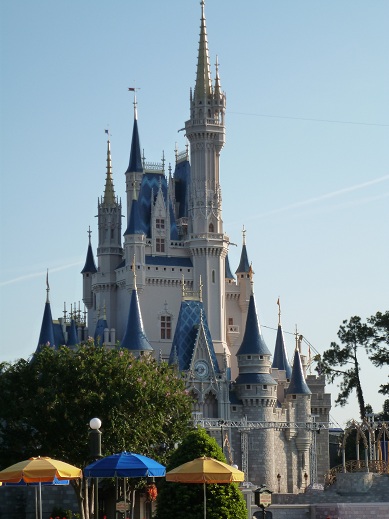 I couldn’t ask for a better view while waiting for our table. 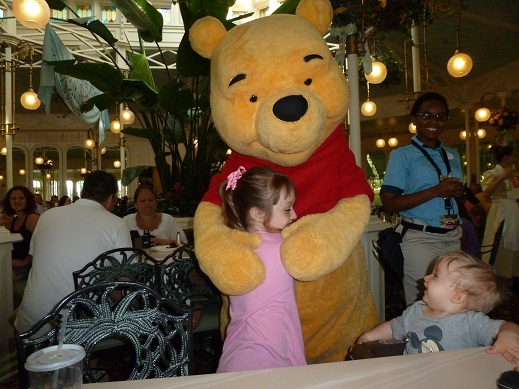 Our first visitor was Pooh.  Hailey gave him a big hug and asked him if he had enough honey to eat.  He shook his head yes and rubbed his belly. 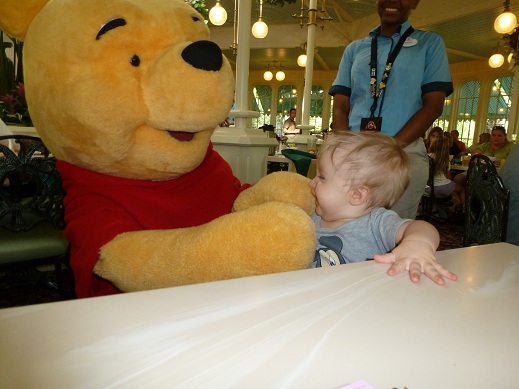 Hunter just loved Pooh and kept laughing at him. 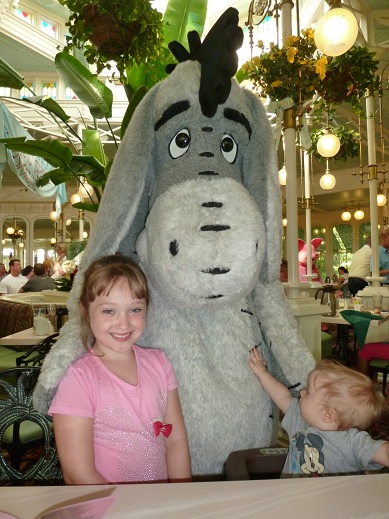 Hailey asked Eeyore if he was having a happy day and he shook his head yes.

We could see Piglet coming to our table and heard the announcement that the characters would be doing the parade soon.  So, when Piglet stopped at our table I could tell he was in a hurry.  He posed for a quick picture.  Hailey jokingly asked him if he knew there was bacon up at the buffet.  He just shook his head yes and gave no other reaction, which was kind of disappointing. 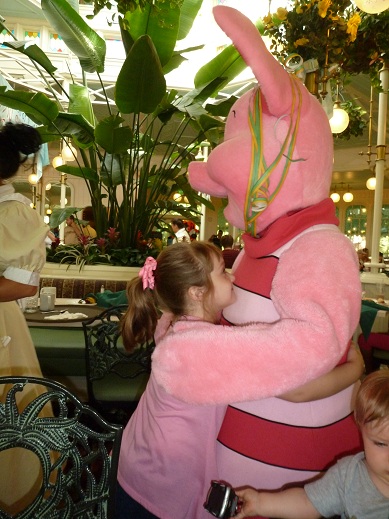 As he was walking away Hailey gave him a hug, but I think it’s obvious he was trying to rush off. 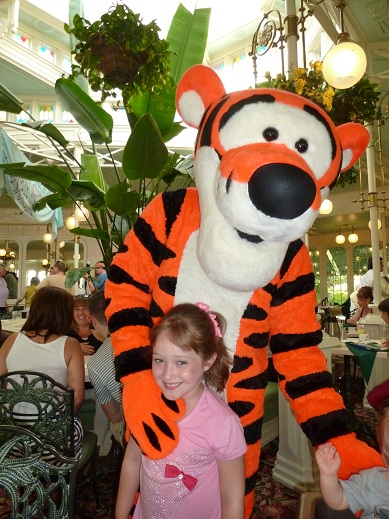 After the parade Hailey got to see Tigger… they did a couple of bounces together but he seemed to be in a hurry too.

I liked the food at breakfast at the Crystal Palace but I was really disappointed in the character interaction.  Other than Pooh it was pretty obvious that the characters were in a hurry.  I feel like if I have to get up at 6am 6 months ahead of time in order to get a reservation then the characters should be able to spend a little more time.  We said last year that we were going to skip the Crystal Palace on our next trip and I wish we would have actually done that.

Hailey posing by the wishing well.

One of our main goals to get done on this day was to meet Merida.  I had heard that her line gets very long through out the day, so we headed there first thing. 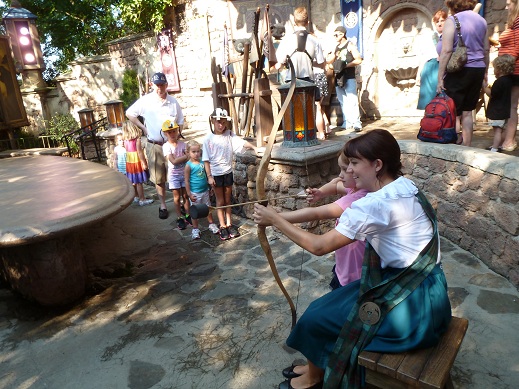 Practicing a little archery while waiting to meet Merida. 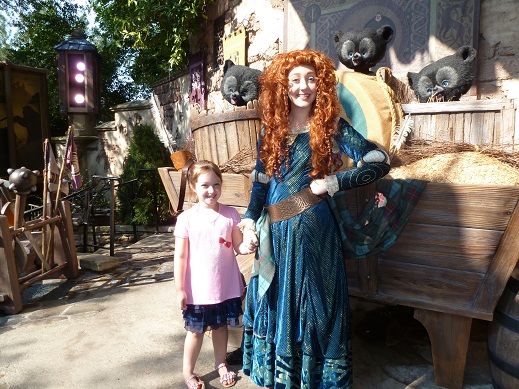 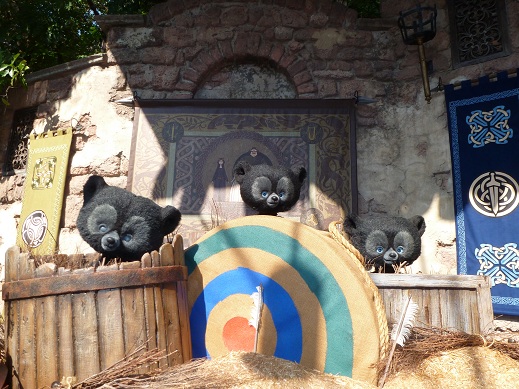 Hailey asked me to take a picture of the bears, otherwise I probably wouldn’t have.  I’m glad I did, because I have heard that they are no longer there.

I don’t know if it’s because it was still early in the morning or the time of year but we only waited a few minutes to see Merida… and when we left there were only a few others in line. 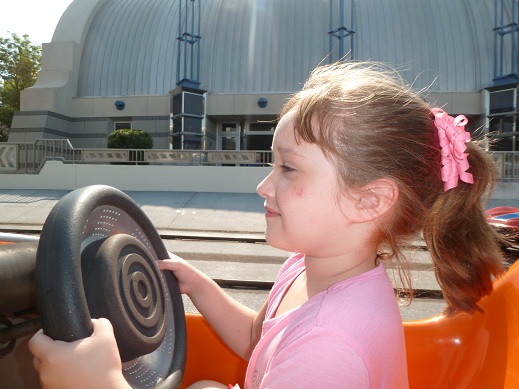 Rich and Hailey rode on the Tomorrowland Speedway 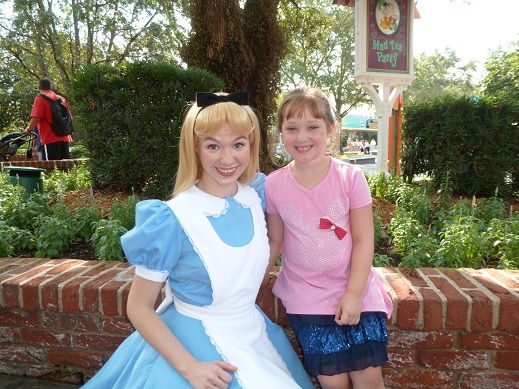 Next we saw Alice 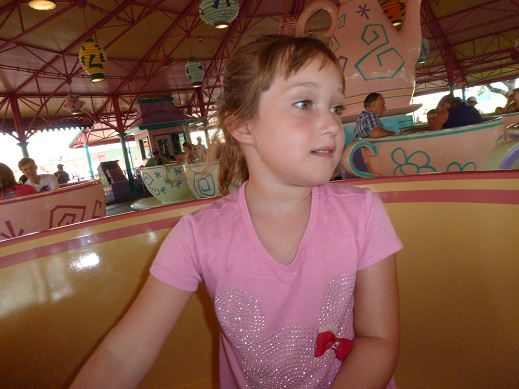 Rich and Hailey went on the Tea Cups… I can not do that ride.

Next we grabbed some fastpasses to go on Buzz Lightyear and then went to the Laugh Floor.  Unfortunately Hunter was not in the mood for the Laugh Floor, so I had to take him out.  When Rich and Hailey came out of there I took Hailey to see Stitch. 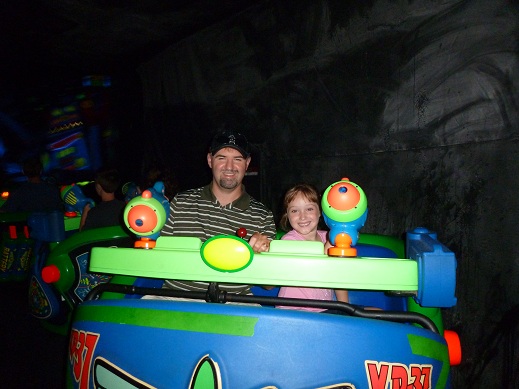 Next we used our fastpasses to go on Buzz.

At this point the park was starting to get a bit busy.  Since it was the day before Labor Day we had expected the crowds to pick up a bit.  We decided to head over to Splash Mountain and get some fastpasses.  On our way there we stopped and got a frozen chocolate banana.  They looked so yummy, but I hated it.  I just ate the chocolate off.

We went on Pirates of the Caribbean while waiting to use our fastpasses for Splash Mountain.  We actually had a 20 minute wait, which was longer than it had been all week.

When we came out of Pirates of the Caribbean, Hailey’s Tinkerbell stroller was gone.  There was another one there in the stroller parking, but it wasn’t hers.  It was much more worn out than hers was.  Since we bought hers right before our trip it was new and this one was definitely not.  I really wish that Disney did not feel like they had to constantly move the strollers around in the stroller parking.  The mix up (I assume it was a mistake) would have never happened if a Cast Member had not been moving the strollers around.  It was our last day at the park and we probably wouldn’t have kept the stroller anyways (it was cheap and she doesn’t need a stroller unless we are at Disney) but it was still annoying. 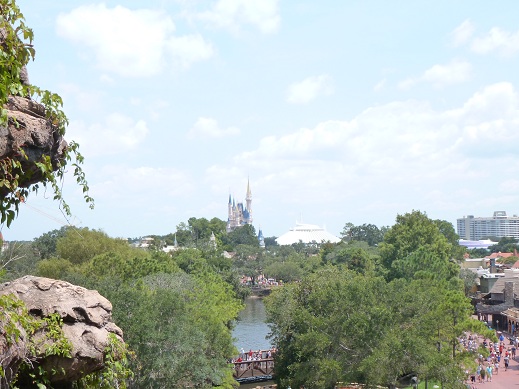 The view from the top of Splash Mountain.

Rich and Hailey rode Splash, then I rode with her, then Rich rode with her again.  We had our fastpasses we had gotten earlier, plus the ones that Hailey and I had gotten earlier in the week after we had to walk off of Splash Mountain.  We had saved them for our last day knowing the park would be busier that day. Then Rich and Hailey went on Thunder Mountain Railroad.  While they were on there I got more fastpasses for later for Splash Mountain.  While I was standing at the fastpass machine it just started spitting out fastpasses- I got 9 of them.  Woo hoo!

We went to Mickey’s Philharmagic one last time. 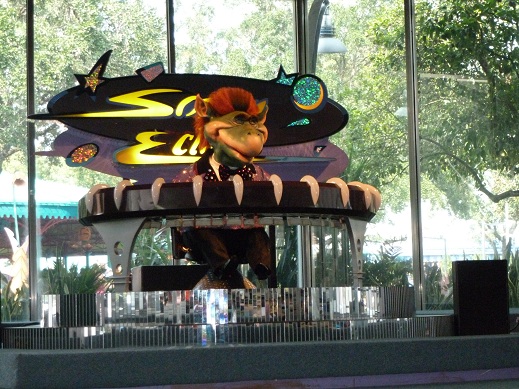 We ate at Cosmic Rays… Hailey was still not eating like herself (since being sick back on day 6), but promised if she could have peanut butter and jelly that she would eat it.  It ended up being the wrong kind of jelly (grape instead of strawberry) but she did eat it, just not very happily.

It was almost time to use our fastpasses at Splash Mountain, so we headed back over there.  Since we had 9 fastpasses and couldn’t use them all within the hour window we gave some of them away.  I waited next to the entrance (which had an hour long wait) and gave them to people who were getting into the line.  Hailey and I rode first, then Rich and Hailey and then me and Hailey again.  What a perfect way to end our trip! 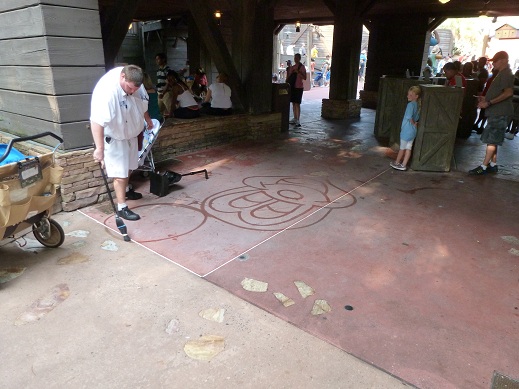 While Hailey and I were on Splash Mountain for the last time, Rich saw this guy walk up like he was going to sweep the sidewalks.  Instead he started drawing with his broom. 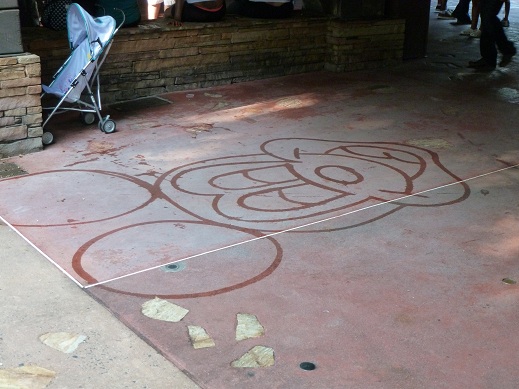 The finished Mickey that he made.

The finished Donald Duck that he made.

On our way our we decided to stop for a Dole Whip… the line was pretty long but since it was our last chance we waited.  (Hailey had Cheetos, which she actually ate- yay!) While we waited for our Dole Whips, Hailey saw another child playing with a bubble gun and decided she wanted one.  We stopped on our way out of the park to see how much they were and I was pretty surprised when Rich let her get one for $12.  If you know how cheap Rich is, then this probably surprises you too :-0

When we got back to our resort we spent the evening relaxing and enjoying the pool.