Tigger with Hunter at 10 months old.  It was so hard to get a picture this month! 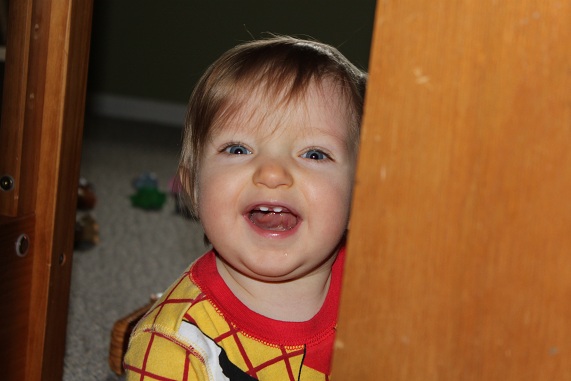 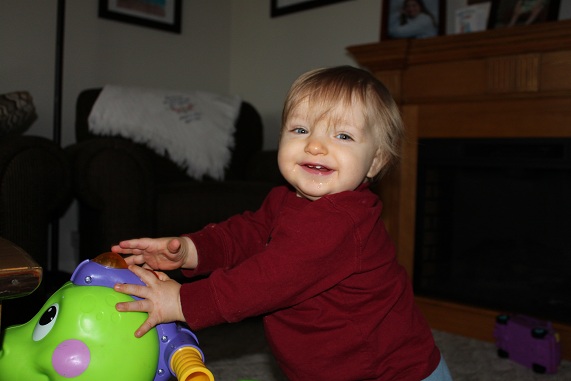 Hunter will use anything that he can to help himself stand. 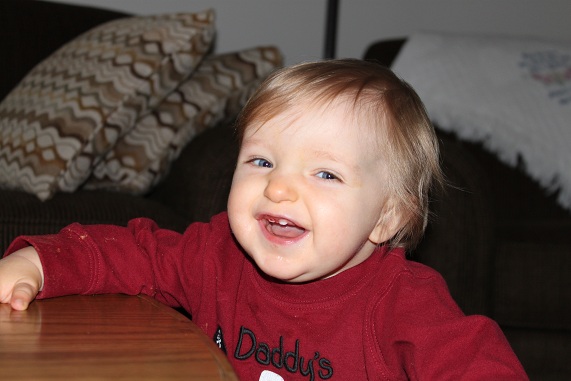 I think he’s close to walking!  He has started standing up and letting go, just standing there not holding on to anything.  He hasn’t tried to take any steps yet, but I know that’s coming soon enough. 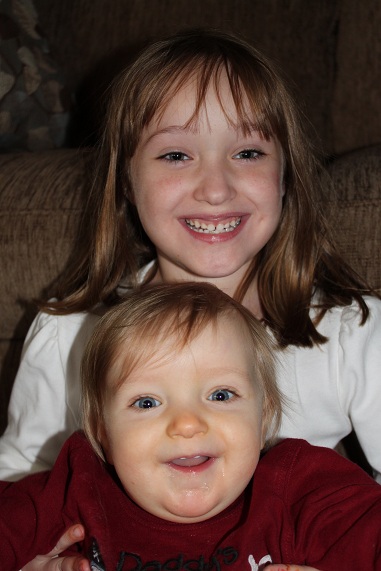 New stuff from this month:

Hunter’s 4th tooth came in a day after he turned 9 months old.  He is now working on two more top teeth.

Hunter had a very busy month checking out our house since he is now a speedy crawler.  He started to crawl about a week before turning 9 months, so this last month he has been very busy finding anything and everything that he could possibly get into.  He is such a busy little boy!!  We have to keep the bathroom and bedroom doors closed to keep him out.  But now that he is standing up all the time he tries to reach the door knobs.  He also tries to reach the top of the gate at the stairs and he works hard seeing if he can get it open.

He also loves to be chased… he’ll crawl a little ways, then sit and look at me and giggle, then crawl again- waiting for me to chase him.  It’s just too cute.  He has just started to help clean up his toys- when I sing the “Clean Up” song, he will stop what he is doing and start putting his toys into his bins.  I love it!!  He doesn’t like it too much when I help- he’ll tip the bin and look for whatever I put in there so he can take it back out hahaha

Sleep has been a little bit better, but only because he sleeps with me and Rich.  For nap time I usually have to hold him while he sleeps (my facebook time) or lay down with him.  He immediately wakes up if I try to put him in his crib.  At night he’ll go into his crib for a little while, maybe an hour at most, then he comes and gets into bed with us.  It’s working for now and we’re all getting more sleep, so we just have to do what works.

Hunter did not have a check-up this month so I don’t know his weight/height.  I think he weighs around 21 pounds.  I know he’s gotten longer but when I tried to measure him he was shorter than last month, so I don’t think I got a very good measurement hahaha.  He is now wearing 12 months or 12-18 month clothes.  He is still wearing size 4 diapers.