Since we didn’t go to Animal Kingdom, as planned, on day 6- we decided to go there on day 7.  We decided to eat breakfast at the hotel before we left. 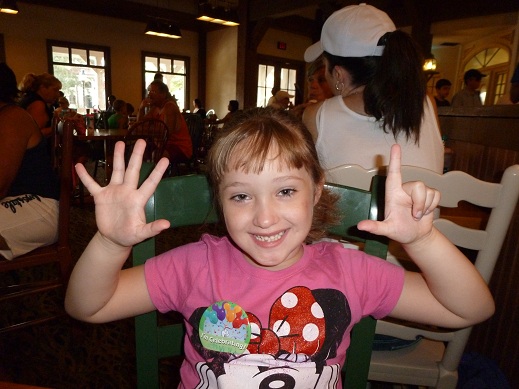 Hailey showing me that it was day 7.  Hailey was still not totally herself, from being sick on day 6.  She ate 1 1/2 pieces of bacon and wouldn’t eat anything else. 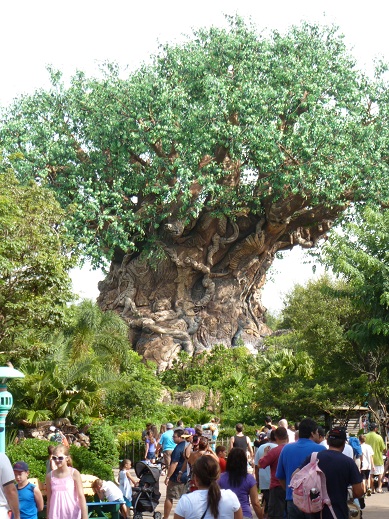 Since we took the morning kind of slow we arrived at Animal Kingdom around 10am. 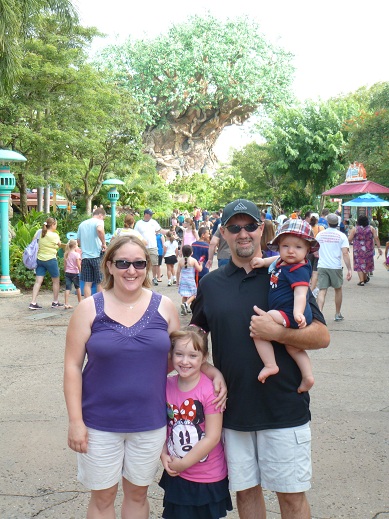 Family picture on our way into the park.

I could tell it was going to be a hot day and Animal Kingdom is always so much hotter than the other parks.  Why is that?  Anyways- I decided we should go on the Safari ride first before it got too hot and the line got long.  So we went there first.  There was no wait.  Here’s a few pictures from our ride: 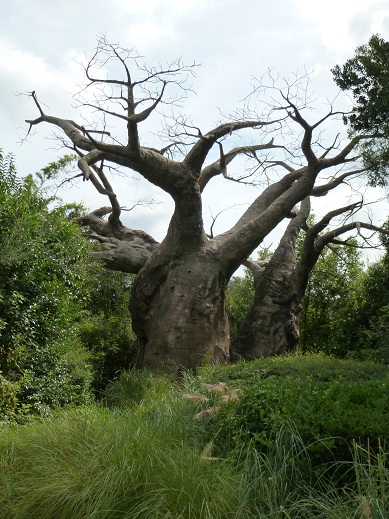 I always take a picture of the “upside down” tree. 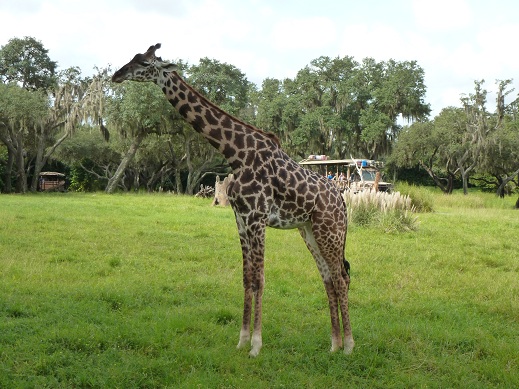 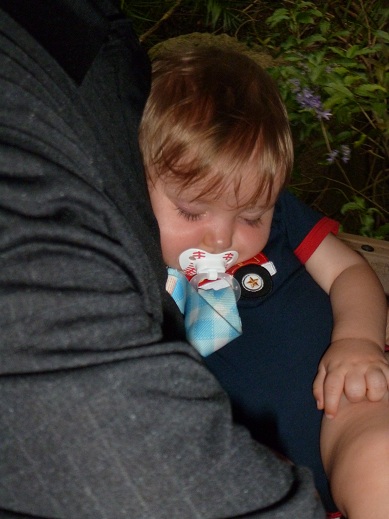 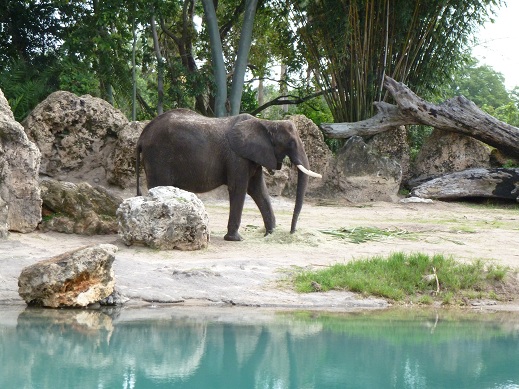 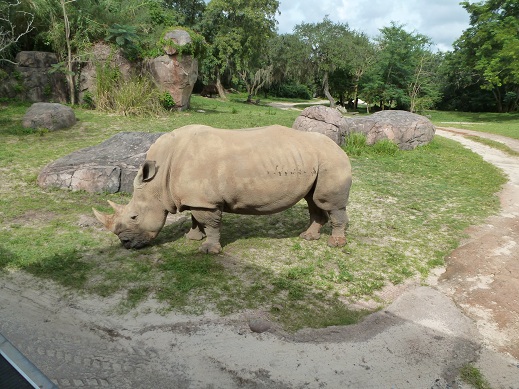 The ride has changed since last year- they took the “story” part out of it, and so now it’s basically just a ride to look at the animals.  I kind of missed the story part and Hailey even asked about it.

It was so hot and humid and I was really glad we did the safari ride first.

Next we got to meet Russel and Dug… we had never met them before so we were excited! 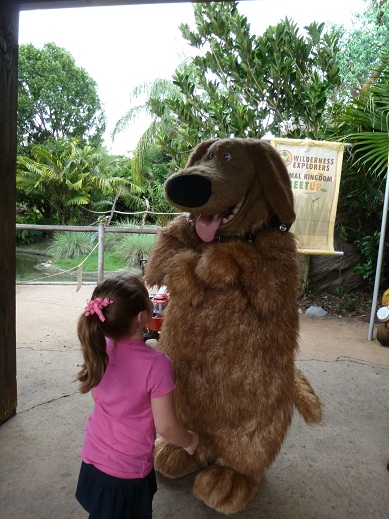 When Hailey met Dug she told him she saw a squirrel… he got pretty excited and started looking around for it. 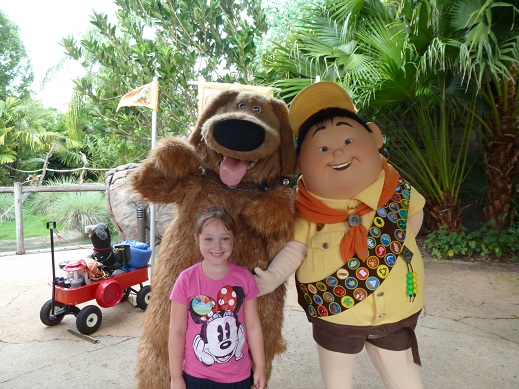 Hailey with Dug and Russel

Next up- we went on It’s Tough to be a Bug.  That is one of my favorites at Animal Kingdom.  I love the end- especially when we have people around us who have never been before and they start jumping out of their seats 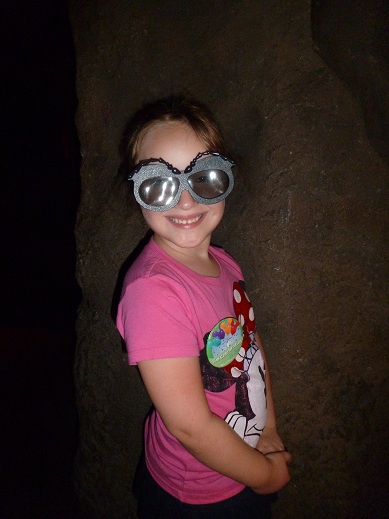 Hailey with her bug eyes on.  Hunter sat still during the whole show with his eyes wide open! 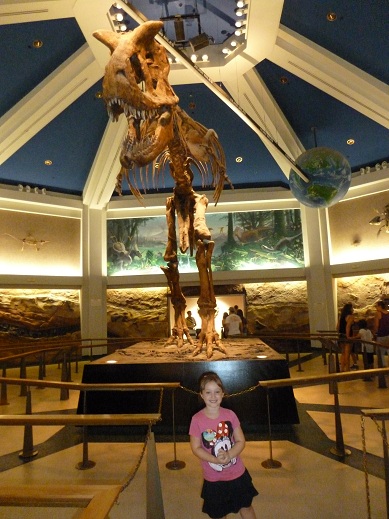 Hailey wanted to ride Dinosaur next. 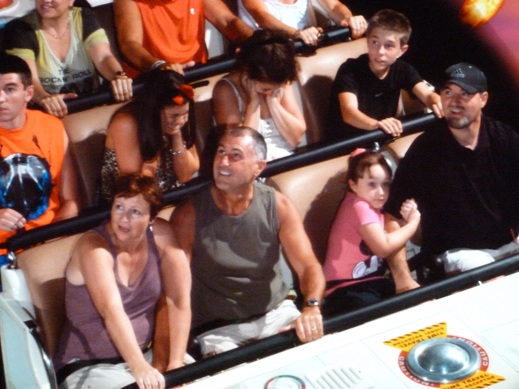 First she rode it with Rich, then she rode with me.  There was no wait at all.  I don’t think she should have ridden two times though because after the 2nd time she looked like she wasn’t feeling too good.  She said she was fine, but I could tell she wasn’t. 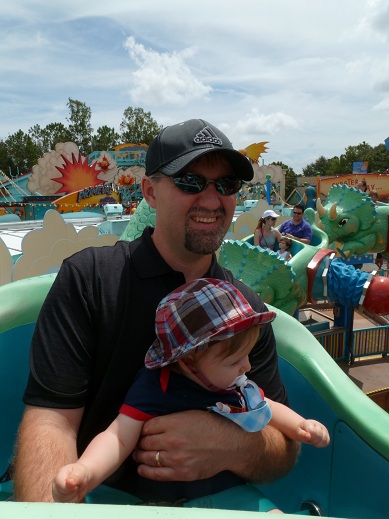 Then we rode on Dino-Dumbo… I don’t know the real name, but it’s exactly like Dumbo except you ride in Dinosaurs.  Hunter seemed to enjoy the ride.  Hailey was definitely not feeling good after that ride- going around in circles when it is super hot and humid was probably not a good idea.

It was lunch time and since I was determined to try new places this year- we at Restaurantosaurus for lunch. 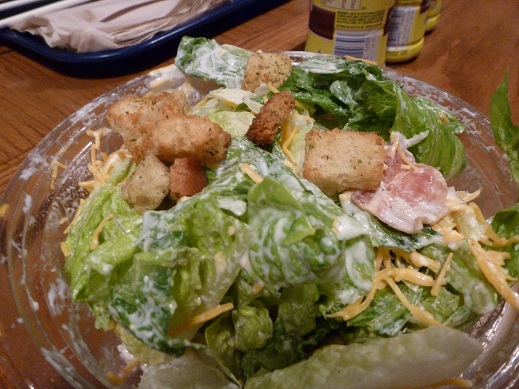 I had this Chicken BLT salad- it did not look like the picture they had posted, but it was still quite tasty.  I don’t remember what Rich had.  Hailey had chicken nuggets-but she said her stomach was hurting from the rides and she only ate one of them. 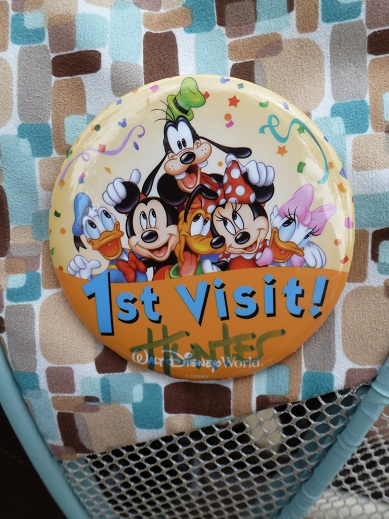 I took this picture of the pin that Hunter had on his stroller, since it was his first visit to Disney World. 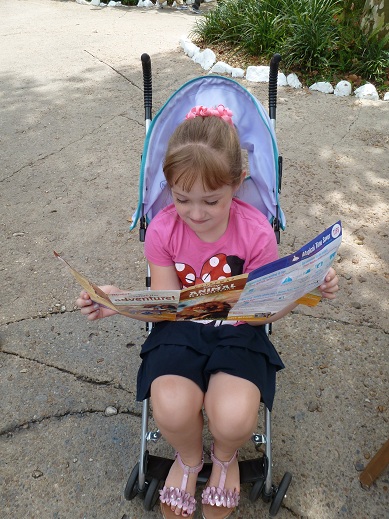 Hailey planned out what to do next… she decided we should go to It’s Tough to Be a Bug again. 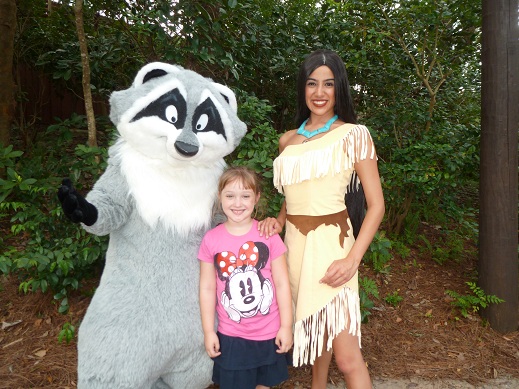 While waiting for the Lion King, Hailey met Meeko and Pocahontas.  She asked Pocahontas how many biscuits Meeko eats everyday.  Hailey guessed that he eats 5 each day, but Pocahontas said he eats more like 100 times that.

I love the Lion King show- it’s my all time favorite show.  Hunter really liked it too- he clapped his hands and waved his arms around to the music.  He seemed to really enjoy the show. 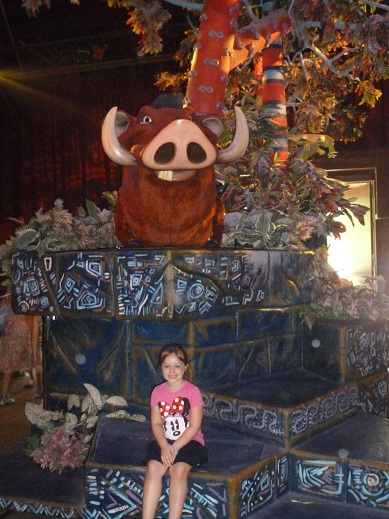 A quick pose after the show was over.

Hailey decided she wanted to go on Dinosaur again- so she went on with me and then again with Rich.  There was no wait at all for the ride.  Then she decided she wanted to go see Lion King again, and I would never turn down a chance to see that show!  After Lion King, Hailey and I went to see It’s Tough for be a Bug again.  Hunter had fallen asleep during Lion King, so Rich kept him and let him nap a bit more so he would (hopefully) be in a good mood for dinner.

Then we were off to the Grand Floridian for our dinner reservations at 1900 Park Fare.  Hailey wanted to wear her Tiana dress to dinner, so I got her changed while Rich checked us in for dinner. 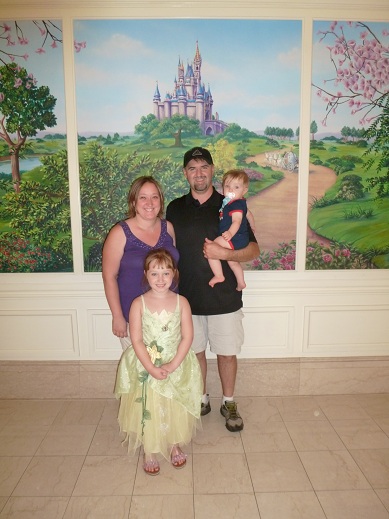 Family picture… it doesn’t seem like that long ago that we took our family picture in the same place when I was 6 months pregnant for Hunter. 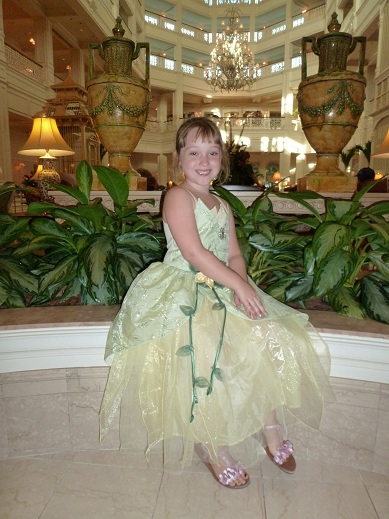 Hailey in the lobby of the Grand Floridian.  It is just so pretty there!  It seems too formal for kids to stay there though. 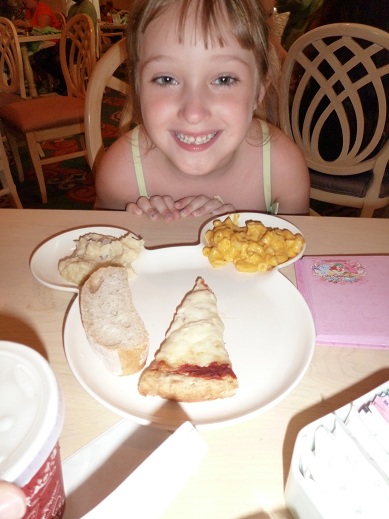 Hailey’s Mickey shaped dinner plate… she actually ate a little more at dinner and ate her whole piece of pizza.  Finally she was eating a little better. 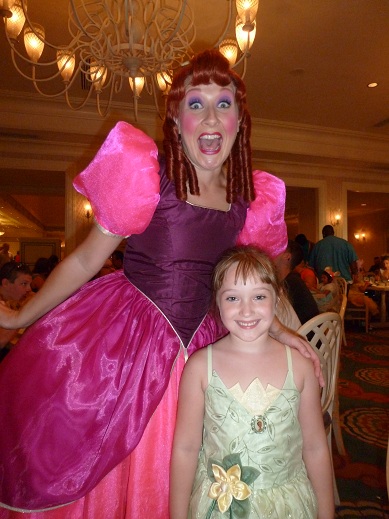 First up we met Anastasia.  Hailey asked her if she still takes singing lessons, and she does.  She said she takes lessons with her sister and she also takes flute lessons. 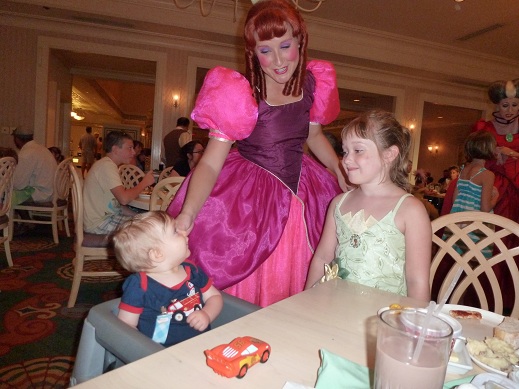 Anastasia talked to Hunter too… he just stared at her like he didn’t know what to think.  She talked so fast and didn’t seem to ever stop to breathe… she was just too funny!!

Cinderella came to our table next- I love how Hailey is looking at her.  She asked Cinderella if she still wears her glass slippers and Cinderella said she had them on and showed them to Hailey. 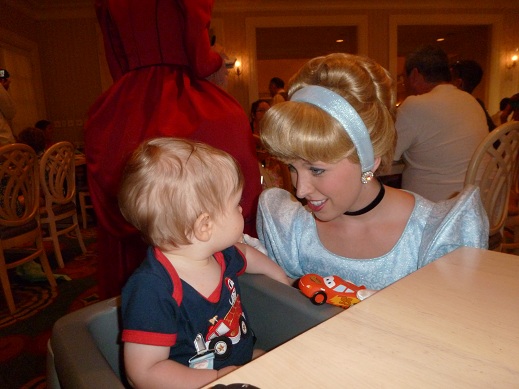 Cinderella played cars with Hunter- he just stared at her.  Then she gave him a kiss and left a lipstick print on his cheek.  I couldn’t get a good picture of it, but it was too cute! 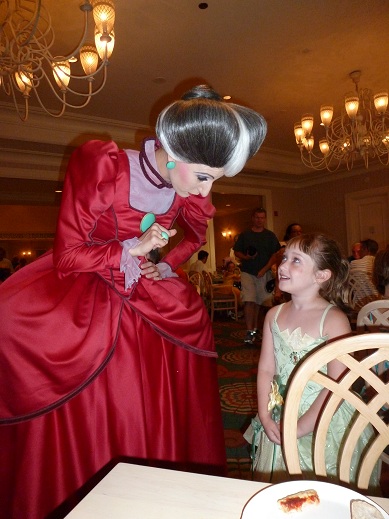 Hailey told the stepmother that she looked very pretty.  The stepmother said, “Why thank you for the sentiments.  I do work very hard to keep up my appearance. After all how else will I ever find my third husband?”  Then she asked Hailey about Hunter and who he was.  She asked if he got all the attention since he’s a baby.  She told Hailey that when he gets older it will be better and he won’t need so much attention. 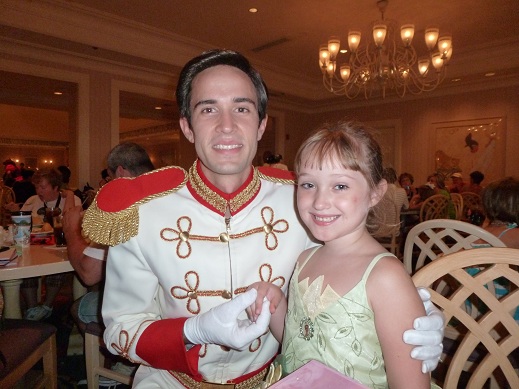 Hailey asked Prince Charming if he still had Cinderella’s glass slipper he found.  He said it is on display in their castle so he can look at it and remember the night he met her.  (Prince Charming and Cinderella might want to get their stories straight- HA!  Unless of course he bought Cinderella a new pair of glass slippers to wear and keeps the original at home.  I’m sure that’s how it’s done.)  As he was walking away Prince Charming told Hailey to make sure she holds onto her slipper until she meets her prince.  I thought that was such a sweet thing to say! 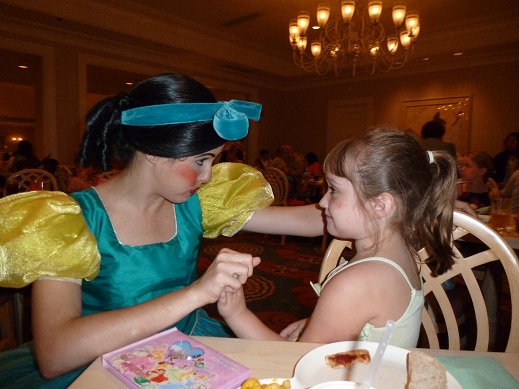 Last up was Drizella and she was so funny.  She talked non-stop just like her sister.  Hailey asked Drizella if she had found her prince yet.  Drizella said she had not and got quiet for a minute.  Then she looked over at Hunter and said she saw someone she could marry.

Drizella thought that Hunter’s first word should be “Drizella” so she worked on getting him to say it.  She was so funny and we were all laughing at her, except Hunter- he just stared.  She gave him a big kiss and left lipstick on his cheek too. 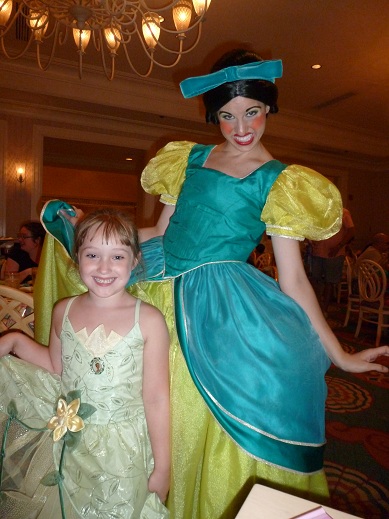 Then she said she needed to get a picture with her favorite sister-in-law.

We had a lot of fun with the characters at 1900 Park Fare.  We ate there a couple of years ago and we weren’t impressed with the food, but I actually liked it this time.  The strawberry soup is amazing.  I might eat there just to have that!  The character interaction here was by far the best of our whole trip! 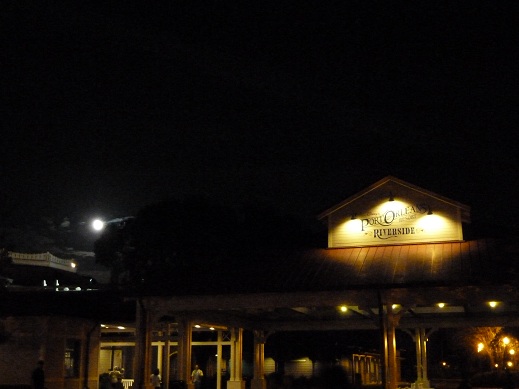 Back at our hotel.  There was full moon that night and it just so happened to be a blue moon (2nd full moon in the same month). That’s the blue moon over Port Orleans Riverside.

Rich and Hailey went swimming for a while.

We only had 2 park days left… since Hailey had been sick and we had missed one of our days at the parks we weren’t going to be able to do a 2nd full day at Hollywood Studios, Epcot and Magic Kingdom.  So which park would we pick to skip??