Strollers Are So Last Year and a Proud Mommy Moment

Last summer when I wanted to get out of the house but didn’t actually have anywhere to go I would take Hailey to the mall.  We would spend the day at the mall strolling in and out of stores all while Hailey sat happily in her stroller.

So yesterday morning I had a fabulous idea- let’s go to the mall and stroll around.  We were there for about 5 minutes when Hailey started yelling, “WALK! WALK! I WALK!”  Apparently strollers are so last year.  So I let her walk.  I thought it might result in a better nap once we got home.

Walking through the mall with a toddler can be pretty interesting.  Hailey had to stop and smell all of the (fake) flowers that were placed every few feet.  She had to run to see Mickey Mouse at the Disney Store.  There may have been a small tantrum when she couldn’t ride on the little rides they have placed throughout the mall.  (When did they start charging a dollar for those rides?)

Oh, and let’s not forget Hailey opening the door of the dressing room that I was getting dressed in before I had finished getting dressed.  I was quick enough to close the door before I gave the world a show, but it was a close call.  And then there was the quick peek Hailey did under the door of a different dressing room where some poor woman was trying to try on some clothes.  When does the whole shopping thing get easier?

And my naptime plan- it didn’t work- Hailey slept for about 45 minutes.

And now I just have to share this proud mommy moment with you.  This afternoon after Hailey’s nap we were playing outside with chalk and I told Hailey to write her name.  So, she wrote this: 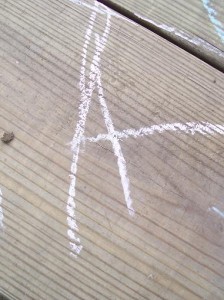 Then she turned to me and said “H”

Just to be sure I asked her again to write her name.  This time she did it on the patio, so it’s not quite as clear but she wrote this:

Now I realize that they look a bit more like an “A” but I think that is pretty good for a 20 month old.  So, I just had to share.

« Another use for Duct Tape
Meme Monday »