Half way through the trip!  I must get these posts done before Christmas!!

On the 5th day my plan was for us to sleep in and hang out at the pool for the day.  When we got up in the morning Hailey said she really didn’t want to go swimming all day because she wanted to go to the parks and go on rides.  It turns out that Rich didn’t want to spend a day at the hotel either.  We did sleep in and took it kind of slow in the morning, but then headed to a park. 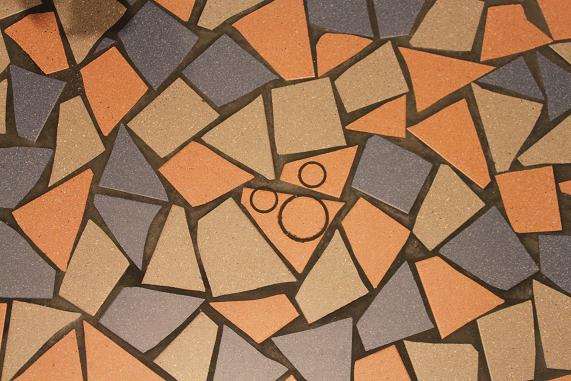 We had breakfast at our hotel and Hailey and I found this Hidden Mickey on the floor in the food court.

Hailey getting ready to eat a yummy breakfast of pancakes and sausage.  Right after I took this picture Hailey squeezed her maple syrup container and it went all over.  Nice sticky mess

We picked Epcot to go to. 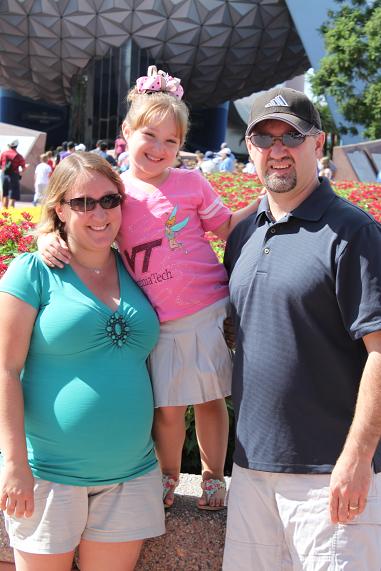 Us on our way in to Epcot. 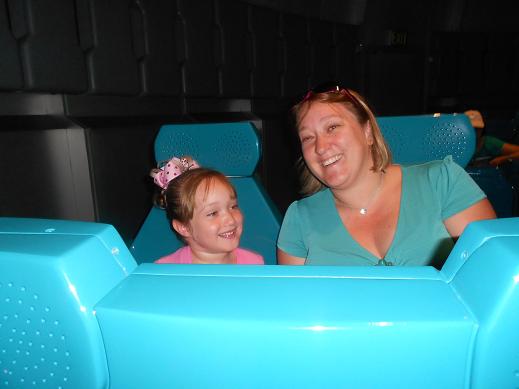 Then we went to the Space Base play area so Hailey could play for a little while on the playground. 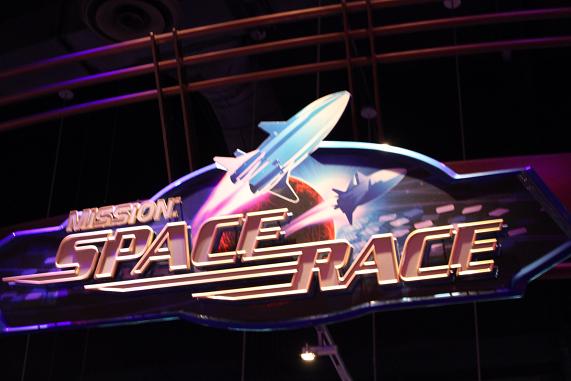 Rich and Hailey playing the game. 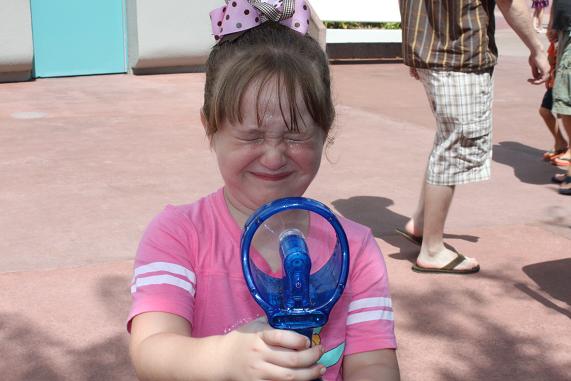 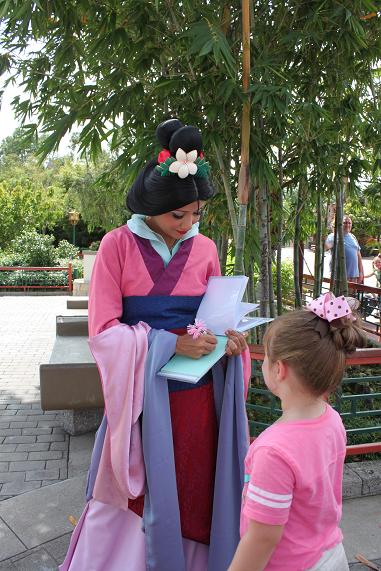 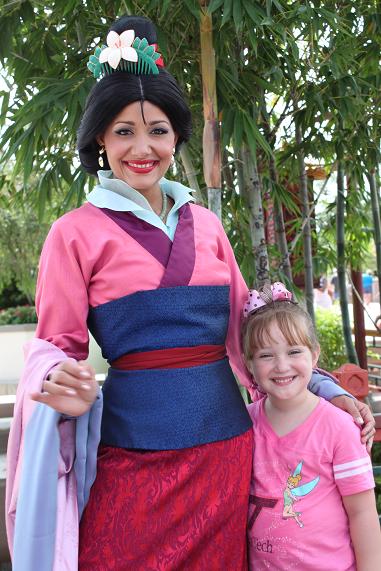 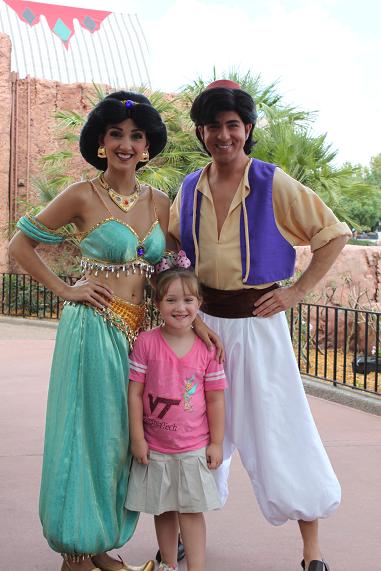 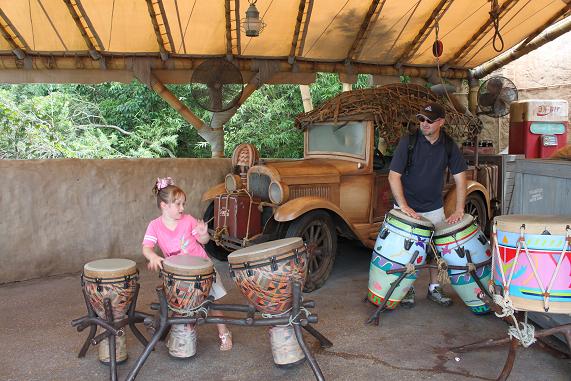 Hailey and Rich taking a little break to make some music. 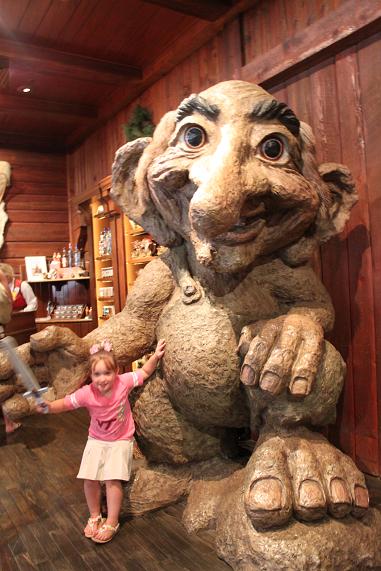 Posing in the gift shop at Maelstrom. 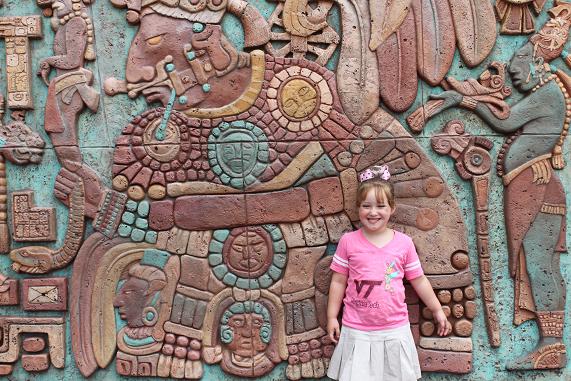 Then we stopped in Mexico 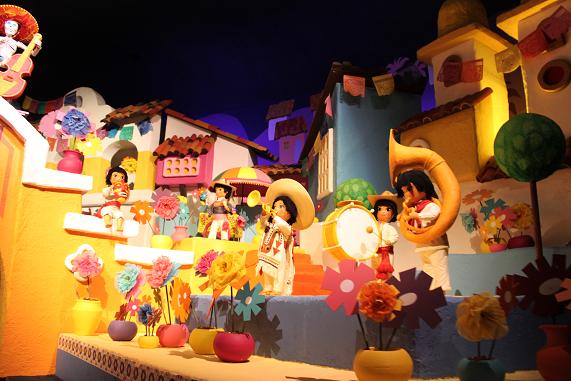 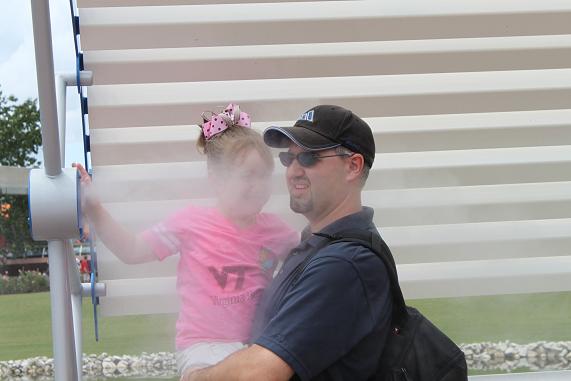 Time to cool off again

Hailey and Rich went on Test Track while I rested in the AC.

Then we got to meet Mickey and Pluto.

A hug for Mickey… 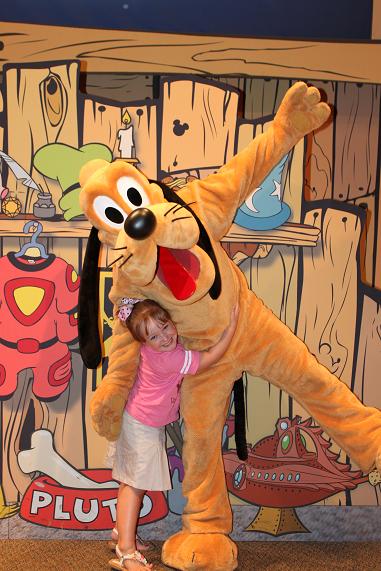 …and a hug for Pluto. 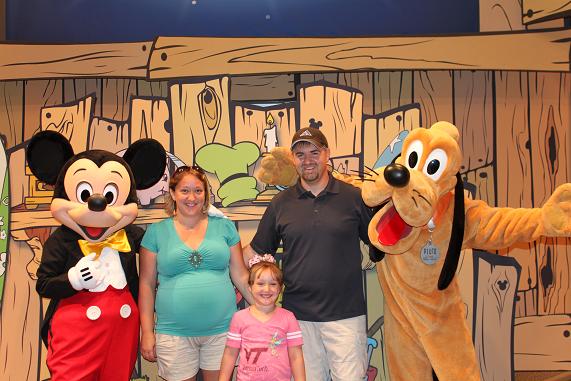 Us with Mickey and Pluto

Time to cool down with some yummy ice cream.

A big hug for the Beast. 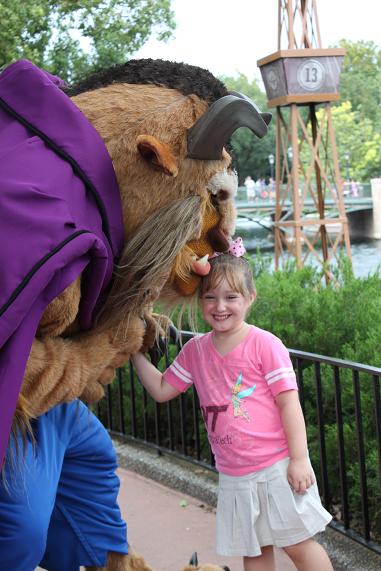 Awww… a kiss from the Beast. 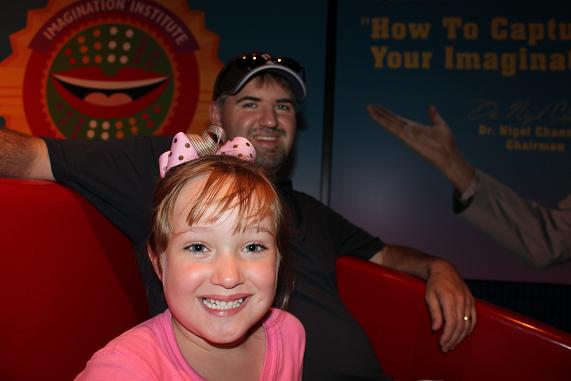 Riding on Journey into Imagination with Figment 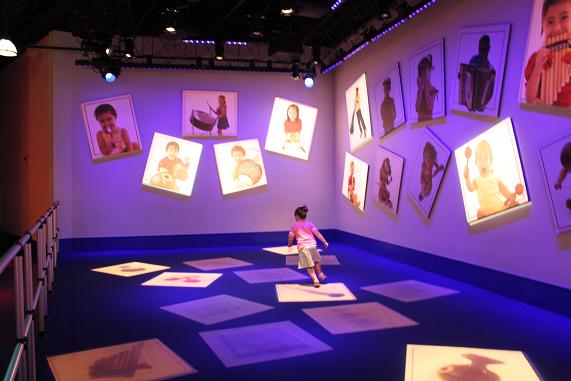 Getting some energy out. 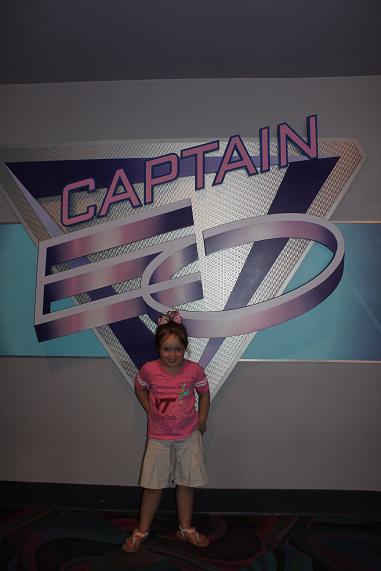 Time to see the 3D Captain EO show.  I may have taken a little nap during this show

Then we went to see Storm Struck 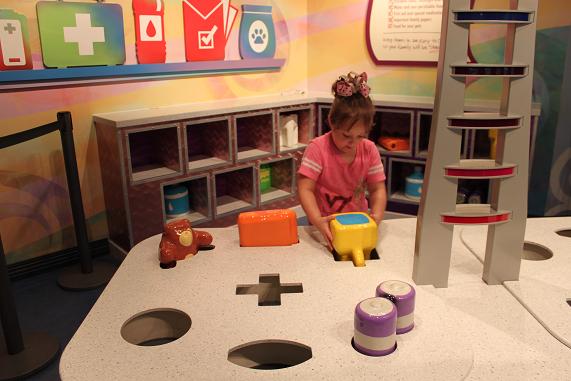 Then we went to Universe of Energy.  It surprised me how often Hailey asked to do this ride- it’s pretty long and doesn’t seem all that exciting for a kid- but she loved it! 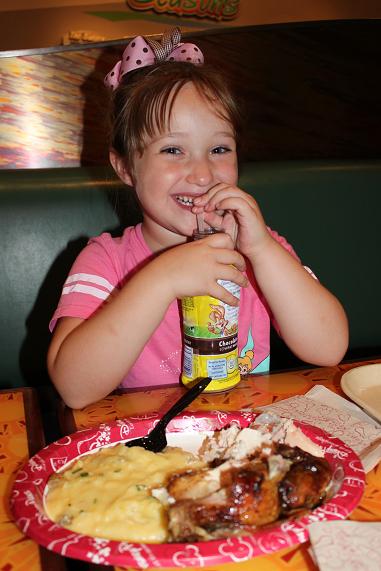 We had dinner at Sunshine Seasons

Hailey on the Nemo ride

Hailey always has to stop and pose for pictures after the Nemo ride. 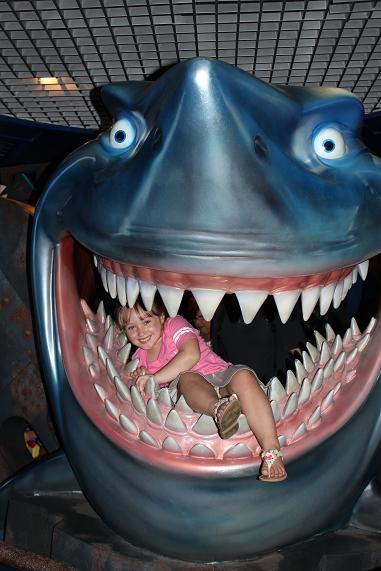 Trying to get away from Bruce. 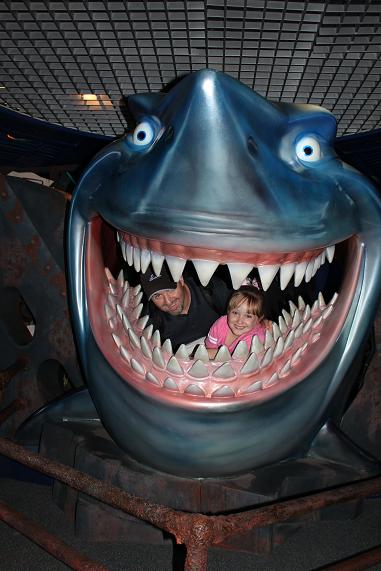 Rich and Hailey in Bruce’s mouth.

Rich and Hailey went and rode Spaceship Earth again while I went to pick up our free pictures from the meet and greet we had with Mickey and Pluto earlier in the day. 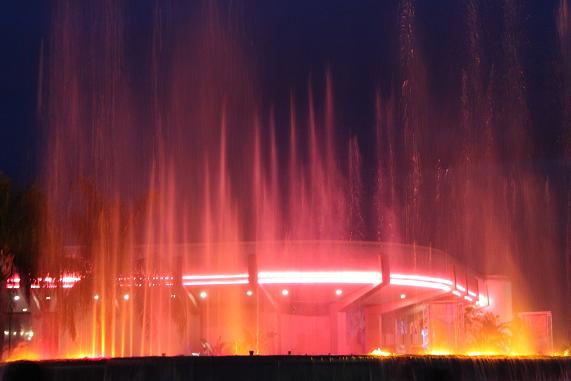 We stopped and watched the fountains for a little while.

Then it was time for Illuminations: 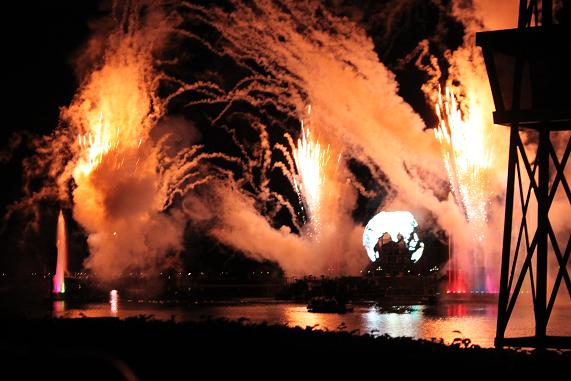 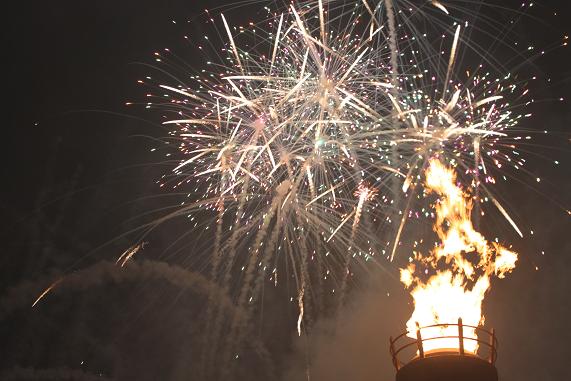 After Illuminations Hailey fell asleep immediately while we were walking to the buses.  She stayed asleep the whole time- in her stroller, on the bus, on our way back to our room, etc.  We were able to just put her right to bed!  I didn’t get to ask her what her favorites were for today since she was so tired.