On Thursday evening we loaded up our car to drive to the airport.  We had found a nice cheap flight for our trip ($152 per person, round trip) but we had to drive to an airport 3 hours away.  Our flight was leaving at 5:50am on Friday, so we thought we would drive up on Thursday night.

We left around 10pm and Hailey went right to sleep.  We stopped when we were about 40 minutes from the airport so that Rich and I could sleep a little too.  But then Hailey woke up around 1:30am and was wide awake and would not stop talking.  Eventually we figured we would just go the rest of the way to the airport. 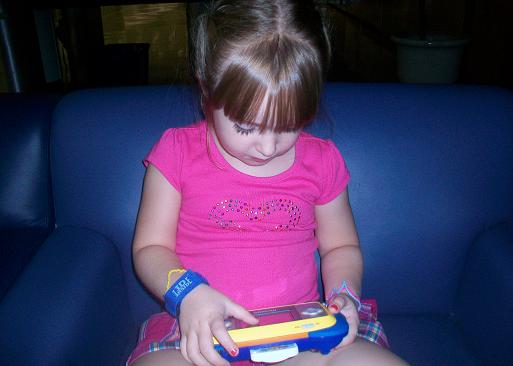 We hung out in an empty airport until the we could go through security.  Hailey kept herself occupied with her MobiGo but had no interest in going back to sleep. 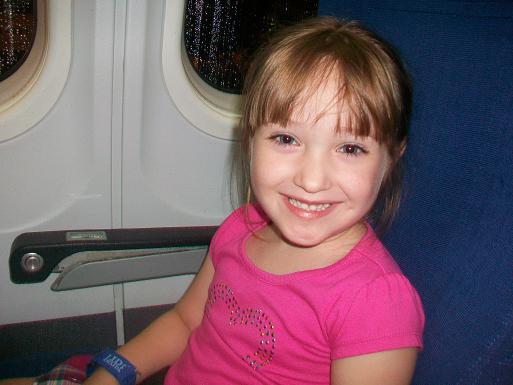 Finally on the airplane!!  Hailey slept some on our first flight.  She woke up before we landed and when she looked out the window during landing it made her sick.  Thankfully I was ready with the barf bag.  During our second flight she was sound asleep the whole time and didn’t get sick at all!

Posing in the Orlando airport.

Waiting at the longest red light ever in front of our resort while we were on the Magical Express. 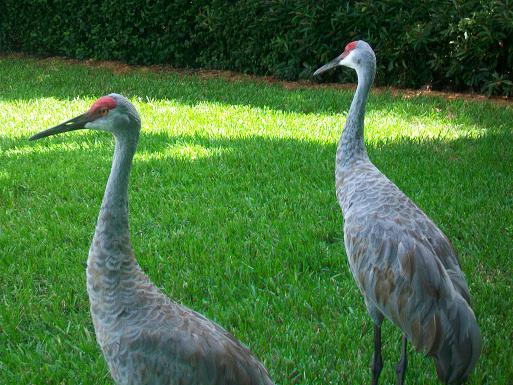 When we got to our room these 2 lovely bird type things were hanging around outside our building.

After some lunch and a nice nap for Hailey and Rich (while I organized the room) we headed off to Magic Kingdom.

When we walked in Pluto was there signing autographs. 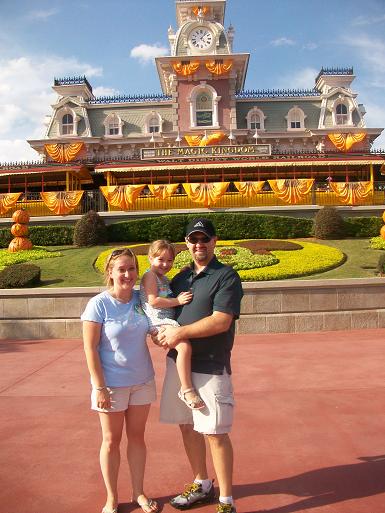 Then we had to stop and see Chip and Dale

Posing with Chip and Dale.  Dale is pulling on one of Hailey’s braids.

Us in front of the castle.  I have no idea why Hailey’s face looks like that- she really was excited to be there!!  See the crane in the background behind the castle?  Apparently they are already putting up lights for Christmas time. 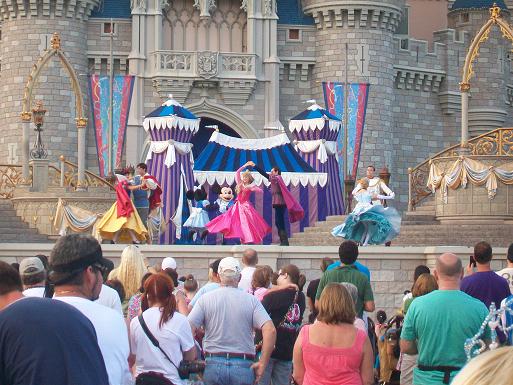 We got there just in time to see the Dream-Along with Mickey show.

Some more of the show. 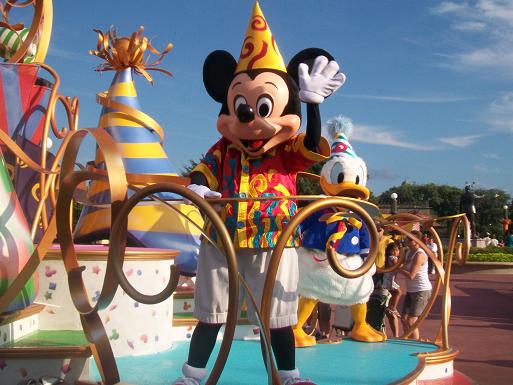 Then it was time for the Move It! Shake It! Celebrate It! Street Party. 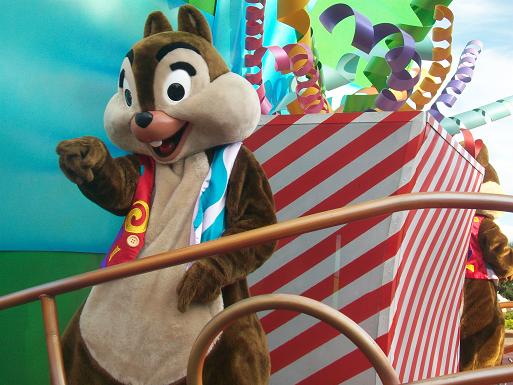 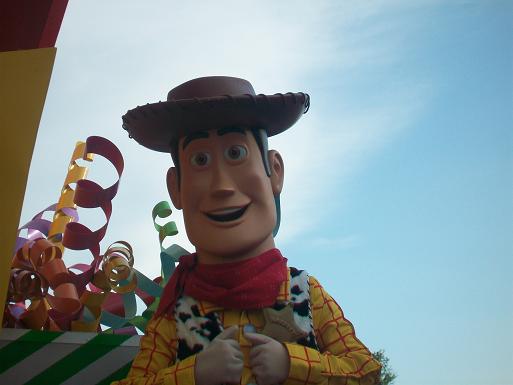 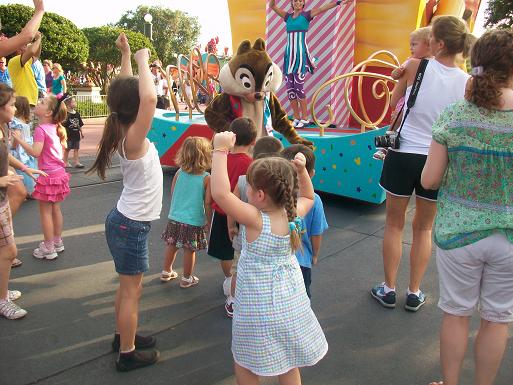 Hailey got the dance with Chip.

Then we went on our first ride of the trip- The Magic Carpets of Aladdin.

Hailey was begging to go on Splash Mountain, since she spent the last year hoping she’d be tall enough to go on it.  But we had a dinner reservation to get to so we decided to wait. 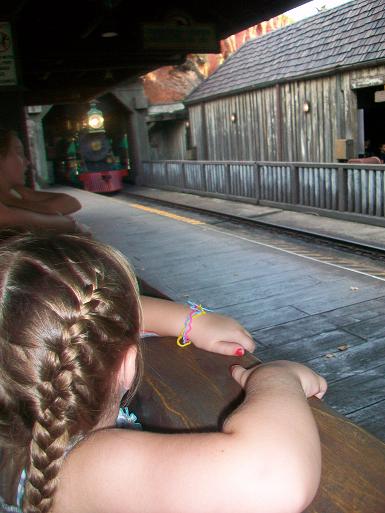 Hailey waiting for the train.

Then we were off to ‘Ohana for dinner.  Since ‘Ohana means family they treat you like family there and everyone is cousins.  It’s so much fun!  When Rich and I ate there for our anniversary we loved it, so we just had to go again.  The food didn’t seem as good this time, but it was still pretty yummy. 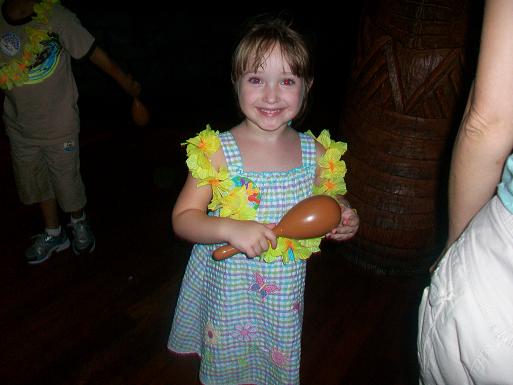 Hailey had fun in the parade.

And the coconut race was cute.

On our way out of ‘Ohana.

After dinner we went over to Epcot to enjoy the Extra Magic Hours.  It was a little after 9pm when we got there. 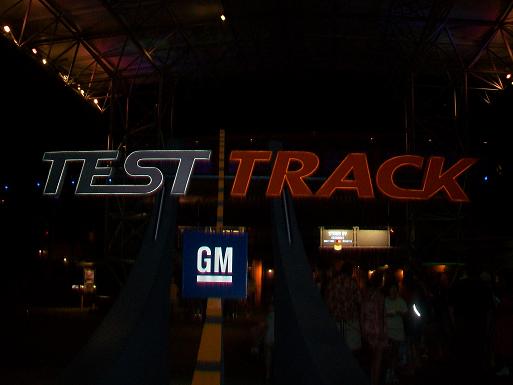 Hailey wanted to go on one of the big rides and the wait time for Test Track wasn’t too bad, so we decided to give it a try. 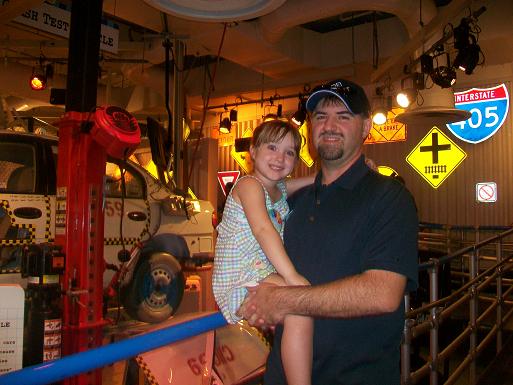 Waiting in line for Test Track!

Sitting in the car waiting to go, looking a little nervous.

And she did NOT like the ride.  When it was over she said, “I didn’t like it Daddy, can we go on Nemo?”  She said it was too fast and she was scared. 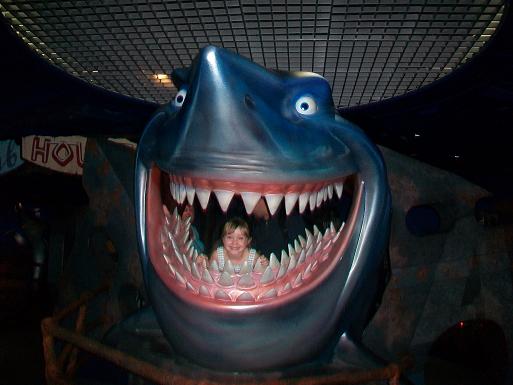 Then we went back to our hotel and slept very soundly for the night!

Favorite of the day- Hailey picked The Seas With Nemo and Friends as her favorite ride.