After a nice relaxing evening at the pool on day 4 we started our 5th day at Magic Kingdom.

I love this picture- we’re all looking at the camera and we’re all smiling!

We got on the train when we entered the park- and Hailey was so excited!

Then we went to listen to Story Time with Belle.  It’s funny because before I had Hailey I remember thinking “who would want to go to story time with Belle?”  Well- Hailey really, really wanted to go- and so did lots of other kids her age.  So I guess that’s who wants to go.  But the story was really cute and Hailey loved it. 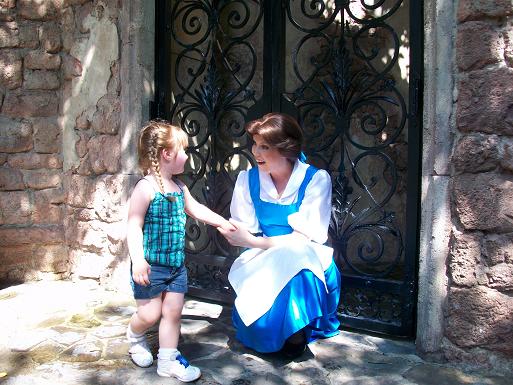 Hailey was thrilled to get to meet Belle and talk to her for a couple of minutes.

After story time we decided to take Hailey on her first roller coaster- Goofy’s Barnstormer. 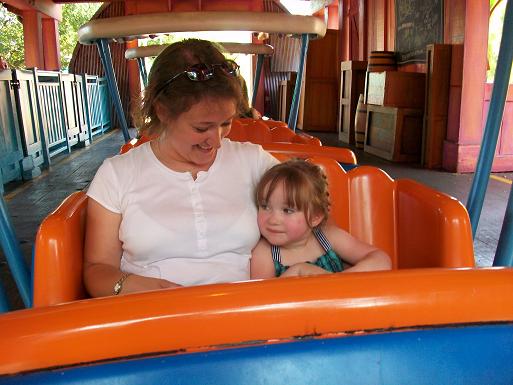 She was excited to go on it, but also a little nervous. 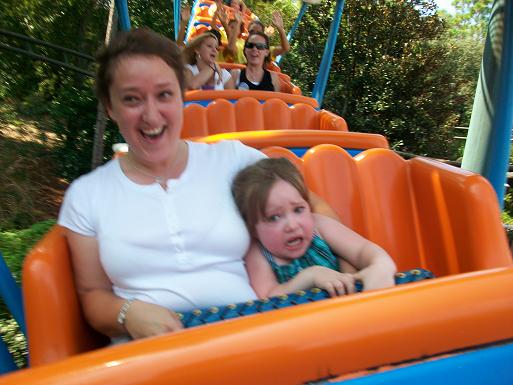 As you can see- she didn’t like it.  She said it was too fast and scary.  And it was a lot faster than I thought it would be.  I knew it was a roller coaster but since kids only had to be 35 inches to ride I thought it would be a bit slower than it was.  The ride didn’t last very long, but the speed was pretty fast and obviously Hailey isn’t a fan of roller coasters yet.

After the traumatic experience on the roller coaster we went to play at Donald Ducks boat for a while.

At first Hailey tried to stay away from the water.  But, it was really hot out and once she realized how good it felt she didn’t want to leave.

Hailey loved this- it was perfect for cooling off- she got nice and wet which kept her cool for a while. 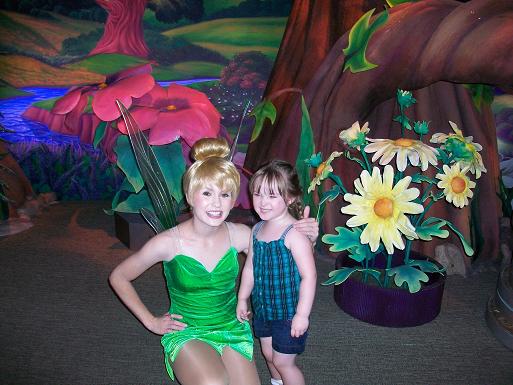 Then Hailey was thrilled to get to meet Tinkerbell! 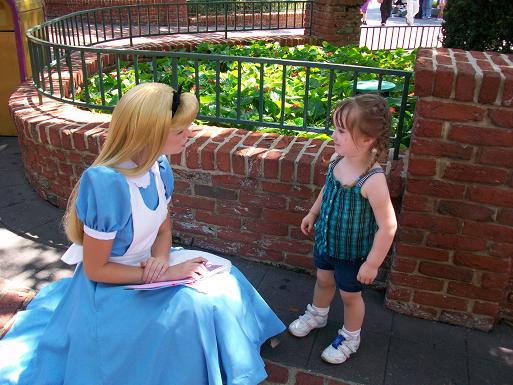 When Hailey met Alice in Wonderland, Hailey told her that her name was Lilo (from Lilo and Stitch).  So, Alice played along and told her a story about when Stitch hid in one of her tea pots and when it was time for tea, Stitch jumped out and made a mess of everything.  It was so cute and Hailey just loved her story! 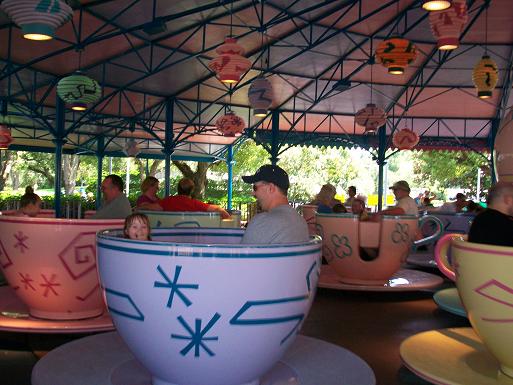 Hailey and Rich had to go on the Mad Tea Party ride after Alice in Wonderland told Hailey how much fun it was.  I can not do rides like that, but Rich was brave and went with Hailey. 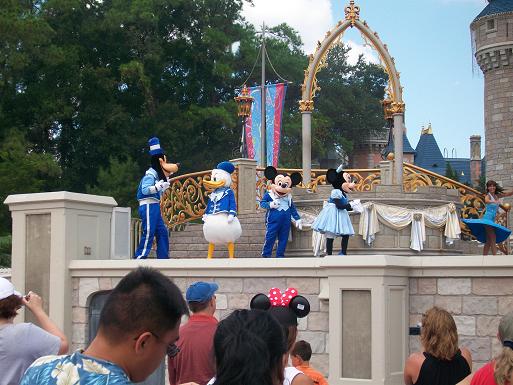 We enjoyed watching the Dream-Along with Mickey show- Hailey loved it! 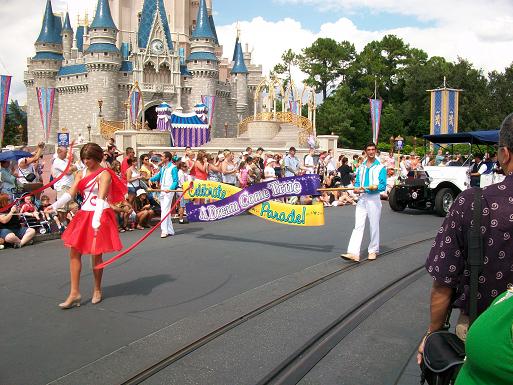 The Celebrate a Dream Come True Parade was great!  We had a perfect spot right in the front and Hailey was so excited to see all of her favorite characters.

Hailey loves the Cinderella story and always asks about the stepmother and the stepsisters.  She started asking the day we arrived in Disney World if the stepmother would be there.  So, Hailey was very excited when she saw the stepmother in the parade.  And since we had such a good spot the stepmother even stopped and talked to Hailey and told her, “That’s a mighty fine carriage you have there.”

Hailey in her “mighty fine carriage” watching the parade.

After the parade it was time for our dinner reservation at the Crystal Palace. 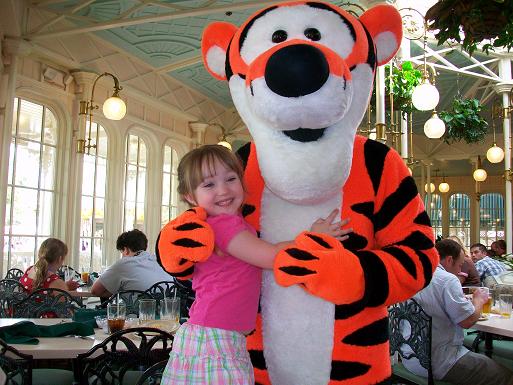 The first character to stop by our table was Tigger- Hailey had a big hug ready for him! 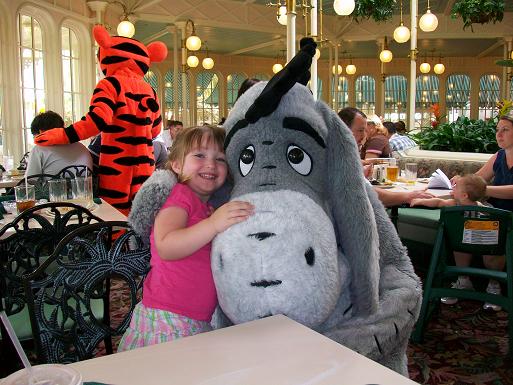 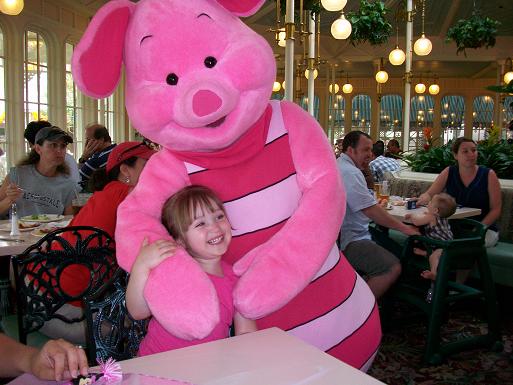 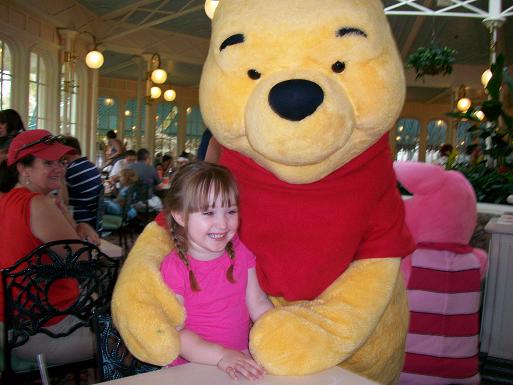 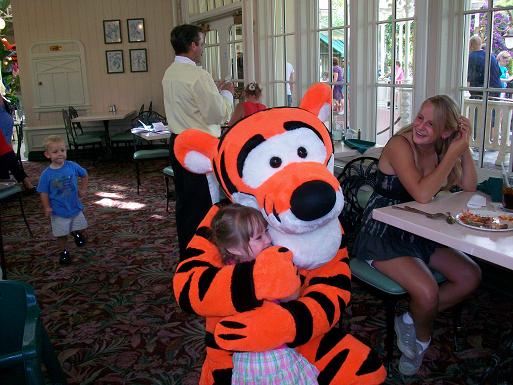 Just before we left, Tigger stopped by again for a hug.  Hailey asked Tigger to bounce with her and they did some bouncing together too. 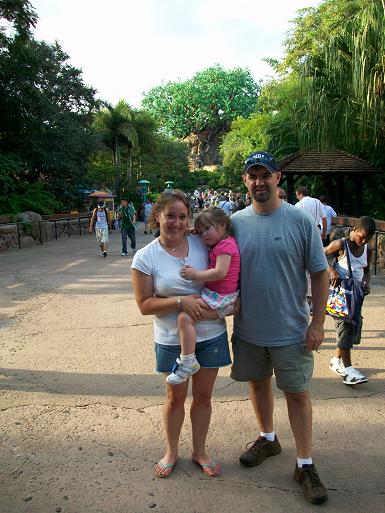 Posing for a quick picture on our way into the park.  Hailey was getting tired of all of the stopping for pictures. 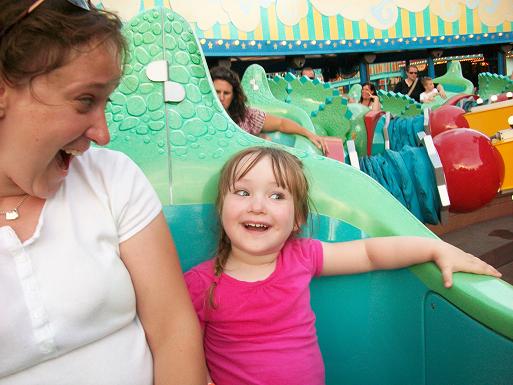 We played in Dinoland U.S.A. for a while and went on the TriceraTop Spin.

Since Hailey had renamed herself Lilo (soon after she became the proud owner of a Stitch stuffed animal the night before) she was soooo excited to get to her picture taken with Lilo and Stitch. 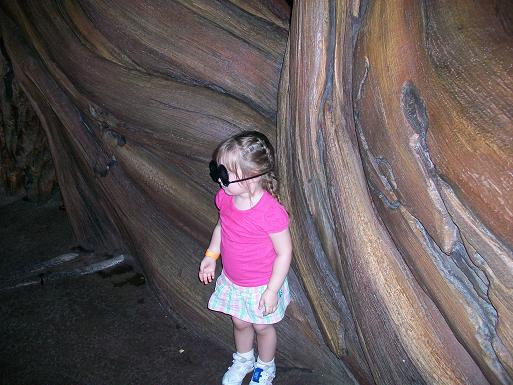 Hailey waiting to go into the It’s Tough to Be a Bug show in the Tree of Life.  While we were waiting for the show to start one of the Disney workers asked Hailey if she’d like to help her.  So Hailey went with her up to the front of the show.  I had no idea what Hailey would do because she is usually really quiet and shy around people she doesn’t know.  But when the lady held the microphone up to Hailey’s mouth, Hailey said, “Let’s start the show!”  It was soooo cute!

And that was the end of our fun filled day 5!  We headed off to bed with plans to sleep in a bit in the morning after a long day and Rich’s throat was starting to feel scratchy