The day was going perfectly according to my plan. And with a 14 month old- you know that is a rare occurrence.

We spent the morning playing in the playroom. After a quick morning snack Hailey went right down for her nap and slept pretty well. She even ate most of the grilled cheese sandwich I made for her.

I got Hailey dressed in her Christmas dress and off to the mall we went.

We arrived at the mall and there was only one person in front of us waiting to see Santa.

“Things could not be going any more smoothly.” I thought to myself with a smile on my face.

I KNOW- I can hear you all laughing at me right now and saying to your computers, “Oh, you poor foolish lady. You know you should never have thoughts like that.”

So, then one of Santa’s helpers came over and said, “Santa is going to take a little break. He’ll be back at 2:00.”

I didn’t think that was too bad- only a half hour away and I had shopping to do anyways. So, I got some shopping done and at 2:10 we went back to see Santa. But Santa was not back. Well, I figured that maybe Santa was having a hard time finding a place to park his reindeer. I mean can you imagine how difficult that would be? So I decided we’d give him a few extra minutes.

At 2:30 we went back again to check. Still no Santa. So, I asked one of the helpers when Santa would be back.

“We’re not exactly sure where Santa is or if he’s coming back.” She told me.

“Here’s a coupon for a free 5×7 if you want to come back tomorrow to use it.”

We waited around until a little after 3:00, just to make sure. But Santa never came back. (Can you blame the poor guy though? I mean really- can you imagine doing that job all day?)

The next day was much too snowy and we did not go back. We made it back two days later (and- yes the manager did let me use my coupon). Hailey was so excited when she saw Santa. She waved and said, “Hi, O-O-O.” (her way of saying “Ho, Ho, Ho”)

When we got a little closer to Santa she started to dig her fingers into my arm. And when she sat on his lap….. well- I’ll just show you. 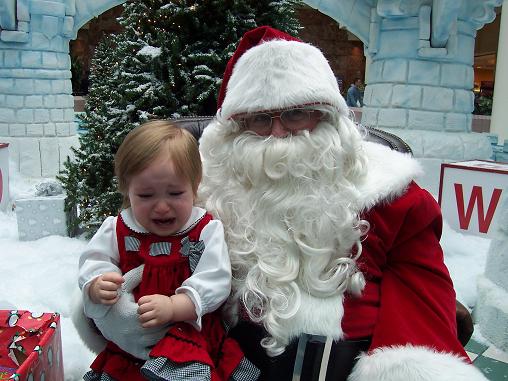 8 comments on “Santa Was MIA”