Leading up to our trip Hailey was so excited!  She started getting her clothes packed a couple of weeks before it was time to go.  We put each outfit into a ziploc bag and she labeled them with which day she would wear the outfit.  We went back through my posts about our previous trips and read everything we did.  She just couldn’t get enough of talking about our trip- she was soooo excited!  One evening as we were getting close to our trip Hailey said, “I am so excited I could burst!”  It was so fun to watch her be so excited about going.  I definitely liked it better with her knowing, rather than surprising her like we did last year. 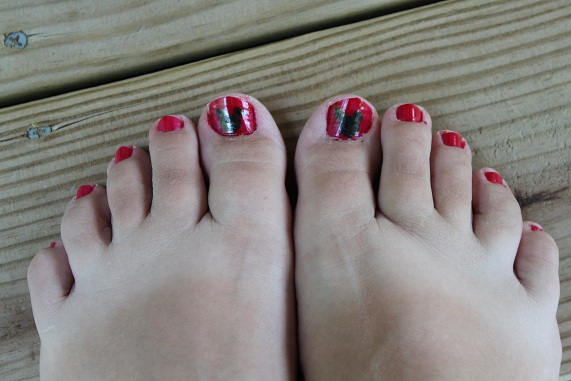 The day before our trip we painted our toe nails red and then added a Mickey head.  These are Hailey’s cute little piggy toes. 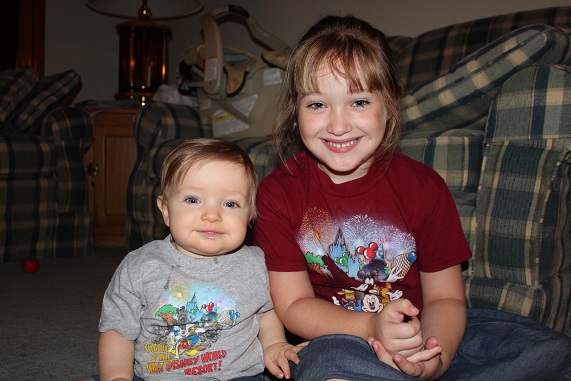 Hunter and Hailey all ready to go.  They were ready to leave for the airport at 4:45am.

The (my) plan was to leave at 5am.  Of course Rich held us up (he always does) and we left at 5:28am.  I wanted to leave with plenty of time so I wouldn’t have to get stressed about making it to the airport on time.  We were flying out of an airport that was 3 1/2 hours away because we were able to get a good deal on the plane tickets.  In the end, by the time we paid for gas and parking (in addition to it being extra stressful) we didn’t save a whole lot.  I think it would be worth it to pay a bit more to fly out of an airport closer to home next time.  On the way to airport Rich kept questioning the directions to get there and made me nervous.  Then I started to think we were going to wrong way.  I looked it up on my phone’s GPS and we were heading the right way, but Rich did make me nervous for a few minutes.

On the way to the airport Hailey got car sick…  that always happens when she’s really tired and/or didn’t eat a good breakfast.  I pulled out the Sea Bands that the dr had recommended for the airplane and put those on her.  A little while later she got sick again.  I don’t think the Sea Bands work well for a child- they didn’t really stay in place for her.  We finally arrived at the airport at 9am.  Rich dropped us off with the suitcases and went and parked the car.  It seemed to take forever for him to get back.  Finally he got back and we checked our luggage.  Since we were flying Southwest we were able to check our 3 big suitcases without having to pay extra

We found our gate and then had some McDonalds for breakfast/lunch.  Hailey said her food didn’t taste good to her and she wouldn’t eat much, I think her tummy was still off from the car ride.  I gave her some Dramamine for the airplane ride, since the dr said to do that if the Sea Bands didn’t work.  Soon after that Hailey saw some girls from her Sunday School class and we talked to their parents for a while.  It’s funny that we ran into them at an airport 3 1/2 hours away!  (They were headed to Disney World too.) It’s a Small World

Finally time to board!  Hunter (on his first airplane) with Hailey. 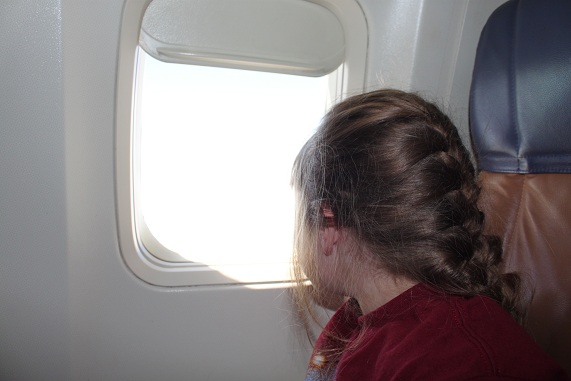 Thanks to the Dramamine, Hailey was able to look out the window.  She was so excited to see the ground below and loved looking.  She kept saying, “MOM, look!!”  After a while Hailey and Hunter were both ready for a nap.  We flew into Fort Myers Fl, for a quick stop and then went to Orlando from there.  We didn’t have to change planes, but the stop made Hunter very antsy.  He was all over the place for the rest of the flight. 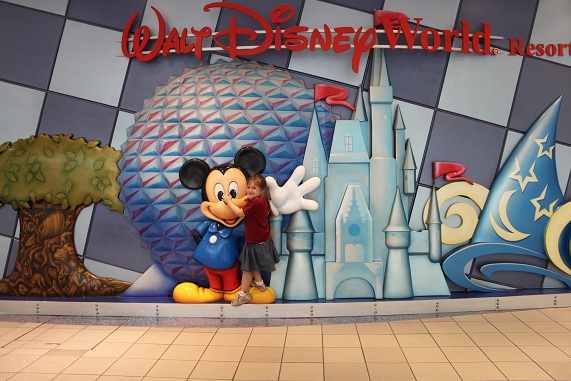 We arrived in Orlando around 3:40pm and had to stop for our annual picture by the Disney store. 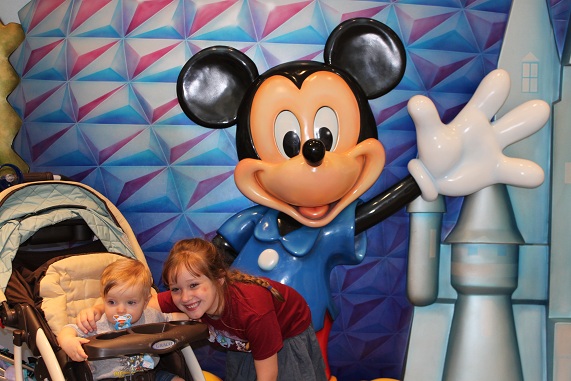 Hunter and Hailey with Mickey.

Then we were off to the Magical Express.  When we got the Magical Express I folded down Hunter’s stroller and went to lock it shut (it has a piece that hooks together to keep it shut) and the piece that was needed was gone.  Apparently Southwest broke it while putting it under the airplane.  Fantastic.  It’s a bulky stroller to begin with and Rich had already been complaining about having to get it on and off of the buses all week- and now it wasn’t going to be able to lock shut.  Grrrrr 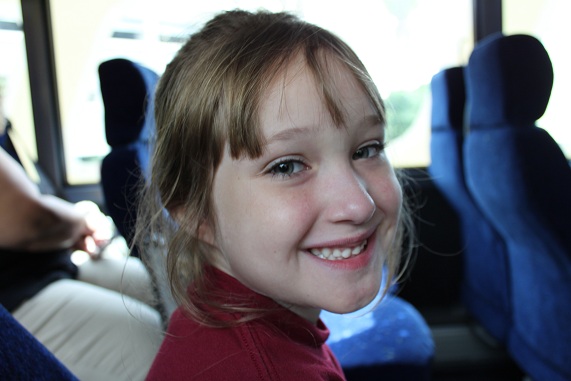 Hailey on Magical Express on our way to Port Orleans Riverside.

We arrived at Riverside and checked in.  It took less than a minute- no waiting in line and everything was all ready to go for us.  While we were in the lobby Hailey said,
“This place looks very royal.”  Then we were off to check out our room.  We stayed in Oak Manor, in the back of the building facing the parking lot.  It was only about a 3-4 minute walk to the main building from our room, so I was happy even though the location wasn’t great. 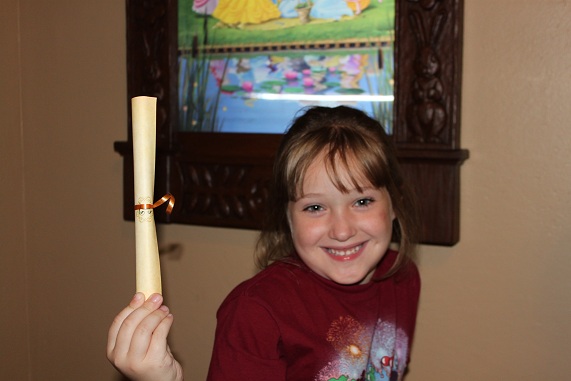 When we checked in we got this special letter. 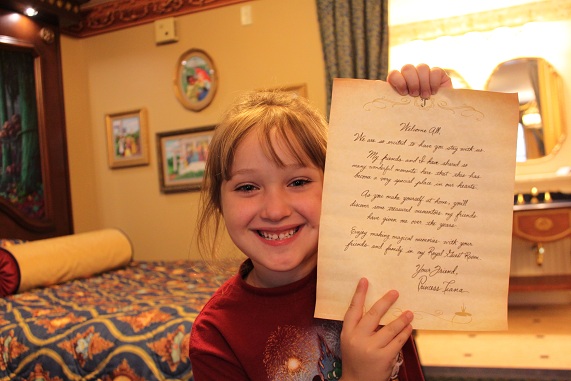 It was from Tiana, welcoming us to our Royal Guest Room.

Then I had to take some pictures of the room before we started unpacking and messed it all up: 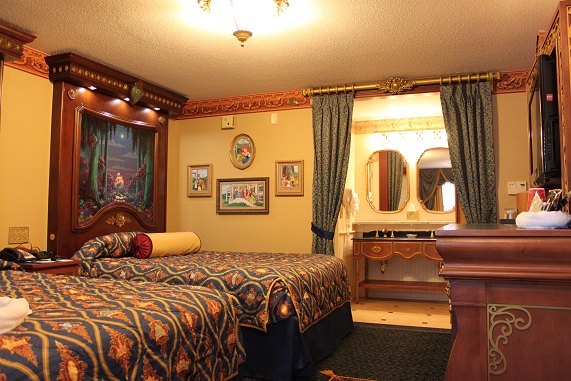 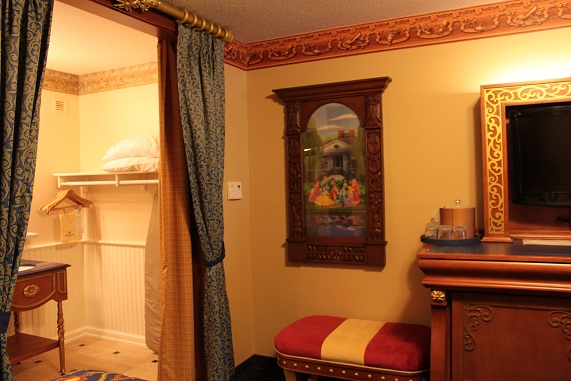 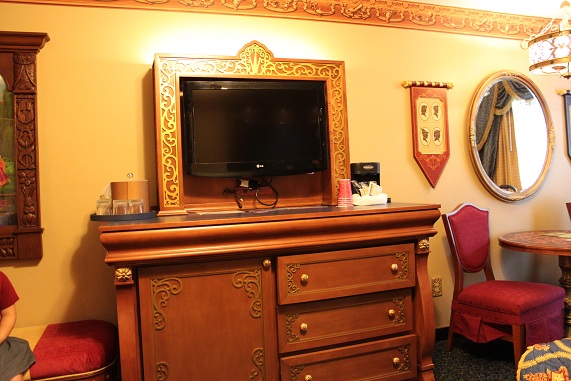 Hunter hanging out on the bed. 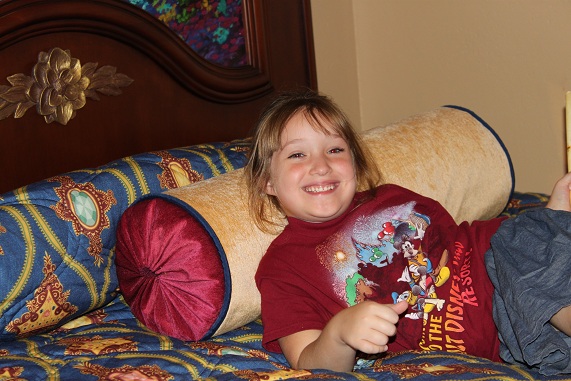 Hailey waiting as patiently as she could for me to finish taking pictures so we could get going to a park. 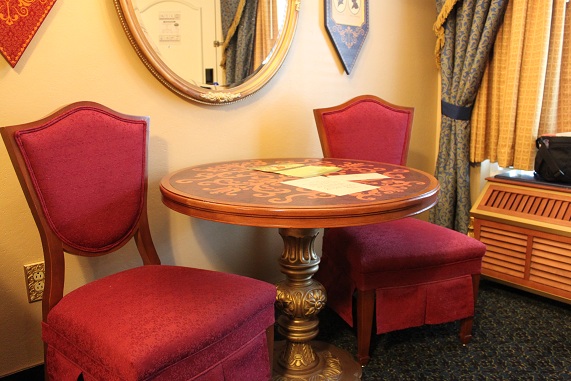 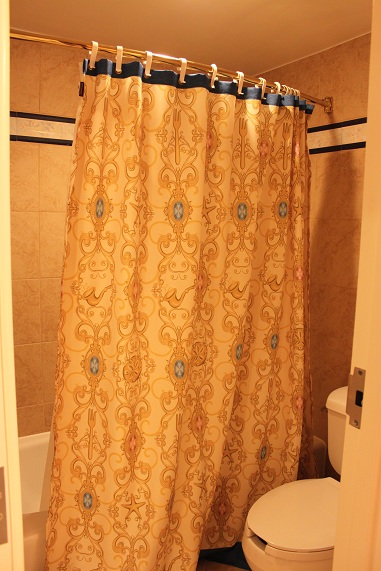 Then we were off to the Riverside Mill Food Court for some dinner. 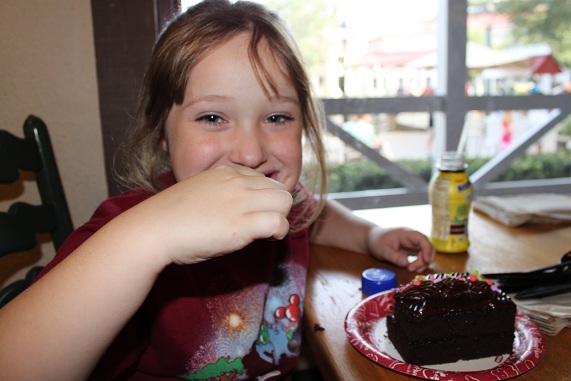 Hailey had some chocolate cake and then some chicken nuggets for her dinner. 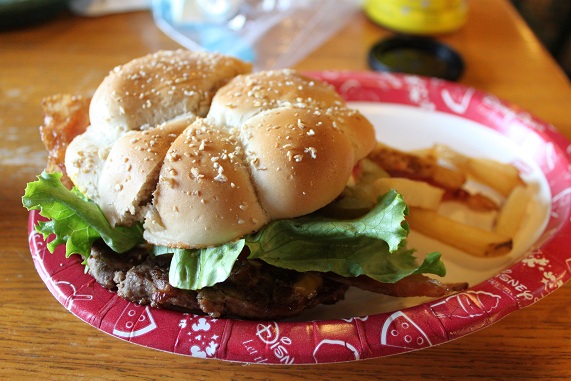 I had the delicious 1/3 lb Bacon Double Cheeseburger.  Rich had the same thing and for some reason didn’t want me taking pictures of his food.  Can’t imagine why.

Then we were off to Magic Kingdom. 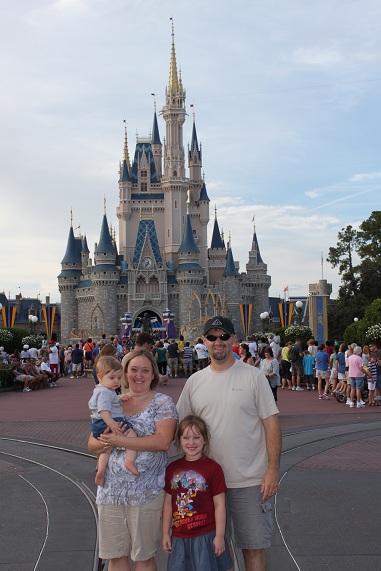 Family picture in front of the castle.

We went and picked up fastpasses for Splash Mountain since it had a bit of a wait.  Rich was able to get 4 fastpasses because they gave us a ticket for Hunter as well.  So, that meant Hailey would get to ride twice- one time with each of us. 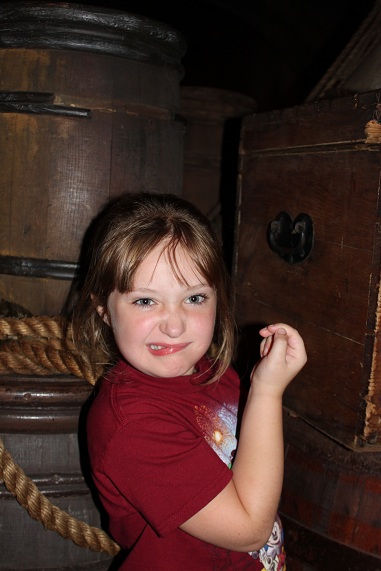 Hunter slept through his very first ride in Disney World. 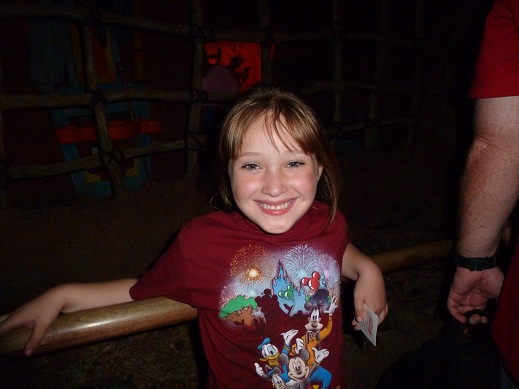 It was time to use our Splash Mountain fastpasses, so Hailey and I rode together first.  I sure did miss going on Splash last year when I was pregnant.  I love that ride!

Then Hailey got to ride again with Rich.

We were exhausted from our long day so it was time to head back to our hotel and go to bed.  We decided to do one more ride on our way out.

We rode It’s a Small World- Hunter’s first ride being awake.  His eyes were huge the whole time.

We had hoped to get out of the park before the Electrical parade, but we got stuck watching it.  We couldn’t move forward or backwards, so we just stayed and watched it.  I was a little nervous that crowds were going to be high for our trip, because it seemed pretty busy. 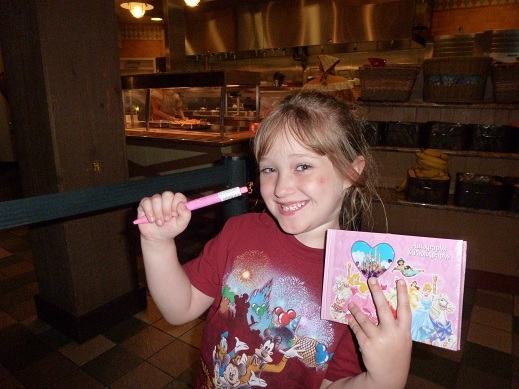 We got back to Riverside around 10, much later than we had hoped.  Hailey picked out an autograph book and pen from the gift shop so she would be all ready to get some autographs on day 2.  Then we picked up our refillable mugs- it was pretty busy in the food court and they seemed to be short staffed.  They were out of a bunch of stuff- there were only black mugs left and we wanted 3 different colors.  Someone did bring out some boxes of mugs as others were looking for their mugs too.  There were only 2 registers open with very long lines.  Someone had spilled something all over the floor and it was just left there with no one to clean it up.  It seemed quite chaotic.  Soon enough we were all checked out and on our way to our room.  Our luggage had arrived while we were gone, so I did some unpacking.  Finally we were all in bed by midnight.  What a long day!